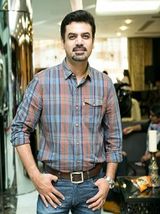 
Vasay Chaudhry is a Multi-faceted star of Pakistani Showbiz Industry who has been seen directing, acting and hosting various shows and has got a number of awards for his hard work and talent. Vasay is best known for hosting one of the remarkable talk shows ‘Mazak Raat.’ He is the man behind writing the scripts of a few all-time hit Lollywood movies. This article has all the information about Vasay, including Vasay Chaudhry Biography and Vasay Chaudhry Movies. It wouldn’t be wrong to say him a multi-talented man who can act, who can write and who can host too. Vasay gave a start to his Showbiz Journey a long time ago, and today he stands where he should be after all the determination and diligence. Apart from writing and acting Vasay has likewise tried his luck in direction and production. He has been honoured with multiple awards for his writing scripts. Once Vasay was applauded as a writer in the Pakistani Press for being comfortable with the Culture of Punjab.

Ch opened his eyes in Lahore on 12th November 1981. Currently, Chaudhry is living in the same city with his family.

He completed his A-levels from the College of Arts and Sciences, Lahore. Later he enrolled himself in Government College University for a four-year certification but couldn’t complete it and later got admission in the University of Punjab, Lahore. Afterwards, Vasay go ahead with an MBA from Lahore School of Economics (LSE) but once again left it after 1 semester. Vasay currently holds an MMA degree that he obtained from National College of Arts.

He got married to Mahera Shah in 2008 and is living a blessed life with 3 of his daughters. No one from his family is part of the Showbiz industry.

Vasay came in the limelight in the late 1980s with a theatre play ‘Desperado’ where he got a chance to gave a screen appearance for a few moment but those few seconds became a turning point in his career and he started thinking about doing acting seriously. After which we seen him in many amazing serials including ‘Pyaray Afzal’, ‘Mann mayal’, ‘Silvatain’ and many others along with many fine actors including Ayeza Khan, Hamza Ali Abbasi, Bushra Ansari, Maya Ali and others. Vasay was also seen in a popular comic serial ‘Takkay Ki ayegi Barat.’ However, currently, he does not appear on the small screen.
In 2015 Chaudhry made his big-screen debut with the popular movie ‘Jawani Phir Nahi Ani’ alongside many fine actors including Humayun Saeed and Hamza Ali Abbasi. Later in 2018 he was seen in the sequel of this movie ‘Jawani Phir Nahi Ani 2.’

He began writing in 2001 with the serial ‘Jutt and Bond’ that aired on Indus Channel. After his hit debut as a writer he gave various masterpieces to the industry including ‘Rubber Band’ and ‘Timmy G’, ‘Inspector Khojee’, ‘Kash Tu Mera Baap Na Hota’ and many more. Vasay’s first extended play was a comic serial ‘Dolly Ki Ayegi Baraat’. Later he composed many long plays including ‘Jackson Heights’ that got a very good response by the viewers. He is also the man behind writing the script of multiple Award functions.
In 2013 he made his debut as a Writer by writing the script of ‘Main Hoon Shahid Afridi’ featuring Humayun Saeed, Javed Sheikh and others. Later Vasay got a chance to work as a writer as well as an actor in blockbuster Lollywood movies ‘Jawani Phir Nahi Ani’ and it’s sequel ‘Jawani Phir Nahi Ani 2.’ He received several awards for these films.

Vasay is one of the very entertaining hosts of Pakistan and he is very popular for hosting a show ‘Mazak Raat’ which appears on Dunia Tv along with ‘Mohsin Abbas Haider’, ‘Iftikhar Thakur’, Qaiser Pia’ and ‘Hiba Waqas’. Various celebrities from media are invited in his show. Other than this he has also hosted many awards shows including Lux style award and many more.