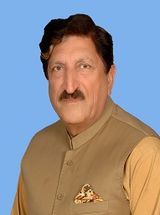 Mr Usman Khan Tarrakai also known as Usman Khan Tarrakai is a Pakistani politician.He was nominated as a member of the National Assembly of Pakistan (MNA) from 2008.He is associated with Awami Jamhuri Ittehad Pakistan (AJIP) political party which is very famous in Khyber Pakhtunkhwa as well as in the all the Islamic Republic of Pakistan.He belongs to Khyber Pakhtunkhwa. Engg. Usman Khan Tarakai was elected in Member National Assembly from the constituency NA-12 Swabi-I in Khyber Pakhtunkhwa as a independent candidate. He was elected unopposed as Chairman of the Special Committee to look into reasons leading to the current power crises in the country and proposed steps to alleviate the power shortage.[1] MNA This member belongs to Haji Azeem Khan family, which is one of the powerful as well as the honest family in NA-12(Swabi-I). Mr Usman Khan Tarrakai is the very honest person as well as educated person, And now serving as Member of National Assembly of the Islamic Republic of Pakistan.[2]  Biography

Usman was elected to the National Assembly of Pakistan as an independent candidate from Constituency NA-12 (Swabi) in general election, 2008.He was again nominated to the National Assembly as a candidate of Awami Jamhuri Ittehad Pakistan from Constituency NA-12 (Swabi) in Pakistani election, 2013.In 2015, Awami Jamhuri Ittehad Pakistan merged into Pakistan Tehreek-e-Insaf (PTI).[3]  Career

Chairman of the Special Committee

Engineer Usman Khan Tarakai has been elected unopposed as Chairman of the Special Committee to look into reasons leading to the current power crises in the country and proposed steps to alleviate the power shortage. The election for the chairman of the said Committee was held today in the Parliament House. The Additional Secretary National Assembly conducted the election.The name of Engineer Usman Khan Tarakai for the chairmanship was proposed by MNA Khurram Jehangir Wattoo and was seconded by MNAs Muhammad Jadam Mangrio and Hameedullah Jan Afridi.The Chairman after his unanimous election thanked his fellow Parliamentarians on reposing confidence upon him by electing him as Chairman. He assured them that with concerted efforts, he would make the committee useful, effective and purposeful.[4]  Chairman of the Special Committee The Additional Secretary on behalf of Dr. Fehmida Mirza, Speaker and Faisal Karim Kundi, Deputy Speaker congratulated Engineer Usman Khan Tarakai on his election as Chairman of the said Committee.