By saqibmunirOctober 5, 2017No Comments5 Mins Read 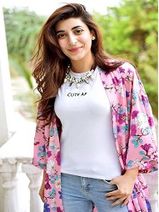 Urwa Hussain is a stunning and accomplished Pakistani actress and a model who started her journey of Showbiz as a VJ and now she is all set to step into the production field. Who knew that this young girl who gave her first appearance when she was hardly 16 years old will come this far without having any artistic background. She is the one who often gets troll by the viewers but she always accepts criticism in a quite positive way. She is a strong independent woman who is vigorous, compatible and skillful.

She was conceived on 2nd July 1991 in Islamabad where she spent all her life but currently, she resides in Karachi with her husband who actually belongs to Lahore.

She shares a very strong connection with her family who are quite liberal and well educated. Her father is a highly ranked Army officer while her mother is a strong independent woman. Her sister Mawra Hocane is one of the big names in the industry who has also worked in Bollywood, both sisters are a treat to watch on a small screen while her brother who resides in London only shown up in a serial ‘Udaari’ with her sister but he didn’t continue acting. Her husband Farhan Saeed is a renowned name in the field of music who is blessed with a mesmerizing voice and has also worked in Bollywood. Both tied the knot in 2016 in a star-studded event.

She did her schooling from Bahria School Islamabad and then completed her bachelor’s from Bahria College Islamabad. She continued her studies during her Showbiz journey.

Urwa made her debut in the Entertainment industry as a VJ when she noticed by the producer of the Show during her theater play in Islamabad. The producer offered her to come to Karachi for the auditions where she got selected and started working as a VJ. Before coming into this field she used to do theaters at her university level and was very active in different co-curricular activities.

After becoming a successful actress she is all geared up to produce her first Pakistani movie ‘Tich button’ which is directed by Qasim Ali Mureed. The lead cast of the movie includes Farhan Saeed, Iman Ali, Feroze Khan and Sonia Hussain while the movie is going to release in 2019.