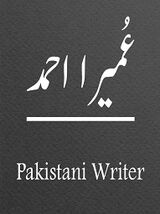 
Umera Ahmed is an exceptional and loved Pakistani Urdu Novelist and Screenwriter who has given various masterpieces to the world in the form of dramas and Novels. She is known for writing one of the most read novels ‘Peer-e-Kamil.’ She is always praised for her writings in the form of awards on different award functions. This article has all the information about Umera, including Umera Ahmed Biography and Umera Ahmed Novels. This legendary Novelist was born on 10th December 1976 in Sialkot. After spending her childhood there, she came to Lahore. Currently, she is living there with her husband.

She did her schooling from Sialkot and later went to Murray College from where she did her Masters in English. After completing her education, Umera did a job as a lecturer where she used to teach students of O’levels and A’levels. However, soon she left the job for concentrating on her writing.

Umera started her career at a very young age when she used to write stories that got published in Urdu Magazines. Her first novel ‘Zindagi Gulzar hai’ that she wrote to improve her handwriting got immense popularity, and later she started thinking about pursuing it as a profession. Then she wrote various stories that kept on getting published on Sunday Magazines.

She has got praise and positive reviews for her writing that comes in the form of Awards. She has won more than 15 awards till now and still counting. In 2006 she bagged the young talent Award in scriptwriting. Later she got many for her masterpieces incorporating Shehr-e-Zaat, Thora Sa Asman, and others.