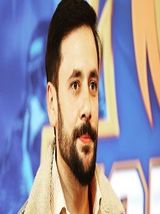 
Tipu Sharif is a versatile Pakistani actor, model and a host who has worked in numerous Pakistani serials as a supportive actor and has established his position in the industry. He was born in a Turkish and a Pakistani origin family. This article is a blend of information about him including Tipu Sharif Biography and Tipu Sharif Dramas. He is a handsome and accomplished Pakistani actor, Model, Anchor and a songwriter who is the part of the Showbiz industry since 2005. He has worked in a number of Pakistani serials and a few Pakistani movies till now as a supporting role. He is included in the list of most handsome Pakistani models which is not at all a surprise for his fans. He has made millions of followers over all these years with his talent without having any artistic background.

He was born on 24th October 1978 in Istanbul, Turkey where he spent a few years of his life. Later his family moved to Pakistan. Currently, he resides in Karachi with them.

He completed his schooling from the Beacon House School, Karachi. For further education he went to the Institute of Business Administration (IBA), Karachi from where he attained the degree of MBA.

He was born in a family of mix Turkish and Pakistani origin. His mother was a Turkish who died a few years ago while his father is a Pakistani. This handsome young man is still single and has no plans for marriage yet.