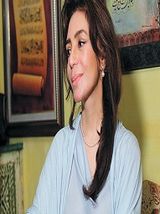 Tehmina Durrani  is a Pakistani women’s rights activist and author. She always have been so Bold and ready to work for needy . She got through worst circumstances but never gave up. Her first book, My Feudal Lord, caused discord in Pakistan’s society by describing her abusive and traumatic marriage to Ghulam Mustafa Khar, then the Chief Minister and later Governor of Punjab. As of 2003, she is married to politician Shehbaz Sharif. Tehmina Durrani was born into a very rich and dominant Afghan family. Her family was also very educated, which resulted in Tehmina’s independent spirit. Her father, Shahkur Ullah Durrani, was the Governor of the State Bank of Pakistan, and the managing director of Pakistan International Airlines, while her mother, Samina, was a homemaker. From her mother’s side, Tehmina is the granddaughter of Nawab Sir Liaqat Hayat Khan, Khattar, a prime minister of former princely state of Patiala for eleven years. Khan himself was the brother of Sir Sikandar Hayat Khan, a famous pre-1947 Punjabi Indian statesman and leader. .[1] Life Family At the age of 17 she was married to Anees Khan, giving birth to her daughter Tania, but the couple divorced in 1976 and she married Ghulam Mustafa Khar a former Chief Minister and Governor of Punjab. Khar had been married five times . 13 years and four children later, Khar and Tehmina were divorced.  As of 2003, Durrani is married to thrice-elected Chief Minister of Punjab, Mian Shahbaz Sharif. They were married in a private ceremony in Dubai, United Arab Emirates. Durrani resides at Raiwind Palace in Lahore with her husband, who is a part of the politically prominent Sharif family, and the brother of Nawaz Sharif, the Ex- Prime Minister of Pakistan. [2] Married Life People keep thinking I am going to write another book”; but went on to describe her husband as a “fine man” and a “gift of God”. After everything she has been through, Durrani said her standards were high. “I think I married the right man for the people of my country”. He married a twice-divorced mother of five, which shows how progressive and liberal he is. When Saiyed (Journalist) pointed out that their marriage said a lot about Shahbaz, Durrani was quick to question, “Because he married someone like me?”“No,” said Saiyed. “Because he has made you happy.” [3] Sharif and Tehmina Tehmina started writting in 1991 . She is renowned as a powerful Writter. In 2005 she started work as a social Activist . She fights for women’s Rights in Pakistan.
. Tehmina’s book ‘My Feudal Lord’ which turned into an international bestseller, translated into 36 languages and gaining worldwide reputation and fame due to her courage to stand up and openly write about the sexual and mental abuse she received at her husband’s hands. The book describes how her marriage life turns to a living hell as her husband’s huge ego and feudal and backward thinking deprives her of the sanctity of a married life. She describes how she is beaten daily and treated like a sexual slave instead of a wife. The book also describes how Khar, the then Chief Minister of Punjab, subjected her to the severest of beatings at small issues, kidnapped her children and seduced her younger sister. She reconstructs how people’s misunderstanding of Islam, especially in the rural areas are the reason feudal lords like Khar are gifted with so much power that makes them an unstoppable and all powerful force in their region. With ‘My Feudal Lord’ turning into an internationally acclaimed bestseller Tehmina made good use of her emerging popularity as a writer and wrote ‘A Mirror to the Blind’. The book was inspired and written on Abdul Sattar Edhi, Pakistan’s celebrated social worker. In 1998 she once again, controversially so, returned with her book ‘Blasphemy’ which is based on the lives of Muslim spiritual leaders known as ‘pirs’. Claiming it to be a true story Tehmina once again highlighted cases of women being tortured and abused in her novel. Since then she has actively been working with NGO’s to raise her voice for the women of Pakistan who are distressed and tormented due to gender discrimination.  [4] Famous Books

Fakhira Younus an Acid Victim was greatly helped by Tehmina . Durrani helped Yunus move to Italy, where she received dozens of plastic surgeries and intensive counseling.[5] Acid Victim
Tehmina Durrani is a Pakistani women’s rights activist and author.She is an author of the book My Feudal Lord and it is her first book. She has also written a book A Mirror To The Blind on the biography of Abdul Sattar Edhi and other book Blasphemy. [6] Social Activist Tehmian Durrani wife of chief minister of Punjab Mr. Shehbaz Sharif. She is also head of an NGO. The name of his organization is Tehmina Durrani Foundation (TDF). She has announced a movement for the social welfare state (SWS).
Tehmian Durrani Sharif has formed a civil rights organization. Tehmina Durrani Foundation (TDF) has been launched few months ago. On addressing press conference in DHA Lahore she described as:-

“All People of Pakistan Must demand a Social Welfare State (SWS). It is the only Real Solution that Leads to Peace, Progress & Prosperity”.