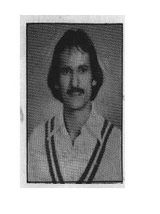 Taslim Arif Abbasi commonly known as Taslim Arif was a Pakistani Cricketer who played many matches  and always tried to give best of best. He took his last breadth on 14th March 2008 due to chest pain. Taslim Arif made his Pakistan debut as a batsman – when he ground out 90 and 46 against India at Calcutta in 1979-80 – but had the gloves for the rest of his Test career. In his third Test, against Australia the same winter, Taslim made a mighty seven-hour 210 not out, the highest score by a wicketkeeper in a Test Andy Flower made 232 not out in 2000-01. But with Wasim Bari a vastly superior gloveman, Taslim only played six Tests; he ended with a batting average of 62.62. He was a surprising signing for World Series Cricket’s second season – uncapped and hardly a household name. [1] Biography Biography

Arif made his Test debut initially as a batsman, scoring 90 and 46 on debut against India in 1980. He went on to play five more Tests as a wicketkeeper though the most significant achievement of his career was his marathon 210 not out against Australia in Faisalabad. It was his misfortune, however, to be a Pakistan keeper during the time of Wasim Bari and by the end of 1980, he had played his last Test. He continued playing successfully for National Bank of Pakistan (NBP) retiring eventually in 1988. After his playing days, Arif remained involved in the game, working as a batting consultant for NBP and a selector for Karachi, his home city, where he was a regular face on the cricket circuit. He also ran an academy with former Test spinner Tauseef Ahmed and was a regular commentary voice for domestic and international matches for local radio and TV. [2] Career Career

Pakistan’s former Test wicketkeeper batsman and junior team selector Taslim Arif died in Karachi on 14th March 2008  night after a brief illness. He was 54. Taslim, a chain smoker, was rushed to hospital in the afternoon after he complained of chest pain, which was later diagnosed as lung infection.  His Namaz-i-Janaza was held after Friday prayers at a mosque opposite his residence in R-95, Block 19, Gulshan Bungalows, Gulistan-i-Jauhar. [5] Death Death