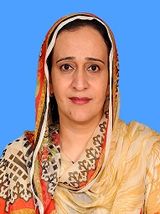 
Tashfeen Safdar is a Pakistani Politician who is serving as a member of the National Assembly while being attached to the Pakistan Tehreek e Insaf. She is the granddaughter of former president late Fazal Illahi Chaudhry and is the current Federal Parliamentary Secretary for housing and works. This article contains all the information about her including Tashfeen Safdar Biography. Tashfeen Safdar also known as Tashfeen Shahid is a Pakistani politician who is associated with Pakistan Tehreek e Insaf since 2018 and is currently working as a member of the National Assembly. She is doing her best to achieve the vision of Naya Pakistan which was glimpsed by the PTI government. She left her British Nationality and decided to live in Pakistan to serve her country and to make it prosper.

She ran for the seat of the National Assembly for the first time on a reserved seat while being attached to Pakistan Tehreek e Insaf in the 2018 Pakistan General Elections. She took the charge on 13th August 2018. On 27 September 2018 she was inducted in as Federal Parliamentary Secretary for housing and works by Prime Minister Imran Khan.