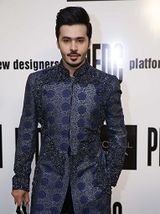 Syed Saim Ali is a good looking Pakistani actor, model, designer and host and undoubtedly one of the pleasurable addition to the Showbiz industry who is giving a tough competition to all the newcomers. This article contains detailed information about him including Syed Saim Ali Biography and Syed Saim Ali Dramas. Saim Ali is a handsome and young Pakistani actor, model and designer who has also functioned as Host of a morning show. He is listed as one of the hottest male models of the Pakistani industry who has come a long way with his diligence and talent. Being born in Lahore city he spent his early life there but currently, he lives in Karachi. He is a son of Pakistani designer Farah Gillani which aspired him to likewise become a designer. This handsome is single and is fully focused on his career.

He holds the degree of Bachelor’s in Fashion Designing and Textile that he attained from the London School of Fashion in Knowledge Village, Dubai while he did his Schooling from Bright Grammar School.

He is known to be one of the best models of the industry who is seen on the cover page of various top magazines. He has walked the ramp for various designers several times and has done a blast on it with his mesmerizing personality and good looks. He is likewise often seen in various commercials on television. He has done modeling for many notable names of the fashion industry such as Flora Lawn, HSY and Chinyere.