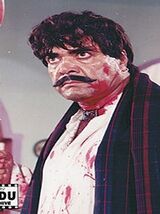 
Rugged expressions, stocky and brawny, dialogue delivery in an aggressive way was the identity of Sultan Khan. He was a Pakistani action hero, producer, screenwriter and made his place as the superstar in Pakistani showbiz. Rahi is recognized as Pakistani adaptation of Chuck Norris, James Bond, Bruce Lee, and Sylvester Stallone, all combined into one with Punjabi influence. After the success of Mola Jatt, he was known as an essential personality for the success of any Punjabi movie. The legendary actor worked in more than 703 Punjabi films and 100 Urdu movies. This article has all the information about Rahi, including Sultan Rahi Biography. Sultan was born in 1938 in Rawalpindi, Punjab. He belongs to an Araein family.

On 9th January 1996, Rahi was coming back from Islamabad at late night when near Samnabaad Chungi car’s tire deflated. Some men took advantage of desolation and darkness and fired him. He got severely injured and was taken to Gujranwala’s DHQ hospital, where his soul departed.