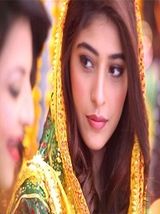 Sonia Mishal is a capable Pakistani actress and a model who is the part of the Showbiz industry since 2015 without having any artistic background. She had been a part of wonderful Pakistani serials and has worked with accomplished Pakistani actors. This article contains a blend of information about her including Sonia Mishal Biography, Sonia Mishal Family and Sonia Mishal Dramas. Sonia is one of the extremely talented actresses of the industry who had gained enough popularity and love with her first play ‘Ishqaaway’. She has made millions of followers over all these years with her beauty and talent without having any artistic background. She proved herself with her amazing performances one after another which wasn’t a surprise for her fans who welcomed her warmly since her first day in the industry when she didn’t have any experience of acting.

She was born on 1st July 1990 in Lahore, Later her family moved to Doha. She has lived her childhood in Doha and Qatar. Currently, she lives in Islamabad with her family and often visits Karachi for her work.

She was born to an ordinary and non-artistic yet extremely supportive family who stood by her side at her every decision of life. She is the younger and the only sister of 3 brothers. She is unmarried and for now only committed with her work.