By maryumtanweerJune 8, 2017No Comments6 Mins Read 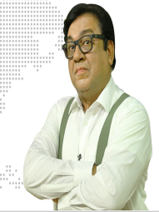 
Sohail Ahmad is a Pakistani writer, producer, comedian, and stage and TV actor. The main reason for his fame is the comedy stage dramas produced in Lahore. Sohail Ahmad Azizi is famous for his eloquent dialogues. He is outspoken critics of women’s dance in stage plays. Although fans of stage dramas know Sohail as a comedian, most of his work on TV is of serious nature, especially in Pakistani television, where he has appeared mostly in serious and negative roles. He has experimented with a variety of roles, from a mercenary to a feudal lord. His role as Azizi in the Dunya News program “Hasb e Haal” became very popular. This article has all the information about Sohail, including Sohail Ahmad Biography. Sohail  was born on May 1, 1963, in Satellite Town Gujranwala to Mian Muhammad Akram.

After matriculating from Millat High School and Inter from Government College, Gujranwala, he did his BA in private. During his studies, he was one of the prominent hockey players.

Sohail acted as a hero in Pakistan’s first silver screen art movie “Nawein Nakoor”. Nisar Hussain made this film for the London Film Festival. When Usman Pirzada made the commercial film “Gori Diyan Jhanjharan”, his focus was on Sohail Ahmed. Sohail, who has acted in ten films, has the honor of playing the role of Allama Iqbal in the documentary “Poetry of Iqbal made by the London School of Arts. He once wrote a feature for the daily Jang and was the managing editor of the daily ‘Tehelka’ for a year and a half.

‘Hasb E Haal’ is a political comedy program aired on Dunya News. It started in 2009. The basic idea of this show was given by Aftab Iqbal. The program humorously discusses economic and social issues. Sohail plays the role of Azizi. The audience is entertained by presenting political issues in a satirical manner. Azizi parodies various political and social figures. He adopts different get-ups like Feeka, Master Majeed, Mr. Michel, Surelay Khan, and Amil Baba. In the form of Feeka, Sohail Ahmed reflects the lower strata of society.