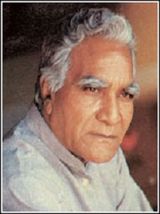 Shaukat Siddiqui was one of the greatest writers of Urdu fiction in the modern era. He was also an accomplished journalist. His forte was the portrayal of the life of a section of Karachi’s underworld. According to critics, no other Karachi writer has studied the life of ‘wretched of the earth’ so candidly. He is also known as Urdu’s Charles Dickens. Shaukat Siddiqui is one of the most prolific Urdu writers.  With his realistic and thought provoking fiction, Siddiqui has made a permanent impression on Urdu literature . Class struggle is the most prominent theme is his works, followed by crime, corruption and tragic lives of the downtrodden masses.

Siddiqui was born on 20 March 1923 in a literary family of Lucknow, India. He gained his early education in his home town and earned a B.A. in 1944 and than  M.A. in Political Science.

Shaukat Siddiqi grew up in a decadent cultural. The old world was rapidly vanishing and the vacuum thus created was being filled with the new age and new ideas. The same was reflected in Siddiqui’s intellectual development. Shaukat Siddiqui migrated to Pakistan in 1950 and started a new life in Karachi, the city of refugees. For the first few years, he faced severe economic difficulties. There was no source of income and no accommodation to live in. He became a part of thousands of destitute people living in poverty and thus had a firsthand experience of deprivation. Also, he closely observed poor criminals and their way of life. This tragic but rich experience became a strong motivation for his stories. Shaukat Siddiqui married with Suraya Begum in 1952. [1] profile Shaukat Siddiqui joined journalism in 1952 which remained a lifelong profession. Five years later he wrote his debut novel Khuda ki Basti which made him a famous writer.   He accompanied Zulfikar Ali Bhutto on several foreign tours.He was an active member of the Pakistan Writers’ Guild and a member of the Progressive Writers Association which was then and still is a part of the larger organization, the Progressive Writers Movement in the India-Pakistan subcontinent. Shaukat Siddiqi worked at the news-desks of the Times of Karachi, Pakistan Standard, and the Morning News. He finally rose to be the editor of the Daily Anjaam, the Weekly Al-Fatah and the Daily Musawat of Karachi, before bidding goodbye to journalism in 1984. [2] career

(God’s own land) tells the sorry tale of Karachi, a city whose population is doubled in a few days following partition. Refugees from all over India are pouring into the coastal capital of newly formed Pakistan, either escaping danger or in search of better lives. Plot is woven around the themes of deprivation, exploitation, lust, intrigue and crime. Characters of the novel are so helpless in their miserable lives that they don’t find a way out and suffer from an unbearable burden of frustration. The most heartbreaking part of the story is the tragic lives of young children who are exploited, forced to beg and commit crimes. The story has tension between the good and the evil in the most unconventional way. Evil triumphs but the good refuses to give up and the struggle continues. The title Khuda ki Basti was taken from Iqbal’s poetry. It’s a metaphor for Pakistan, a country formed in the name of religion. The novel is a tragic but true picture of Pakistani society of that time. Its language is fairly simple and the story is very much relatable. Khuda ki Basti is equally popular among the literary critics and readers. It has been translated in dozens of languages. Pakistan television produced a drama serial based on its story back in 1970s. [3] Writings A couple of decades after Khuda ki Basti, Shaukat Siddiqui’s came up with his second novel Jangloos (Uncouth) which he kept writing for many years as a weekly episode. When the novel was finally compiled, it spanned over three volumes and a startling 1,800 pages which makes it one of the lengthiest, if not the lengthiest novel in Urdu. The story is set on an epic scale with dozens of characters and varying situations, going in depth of many real issues and tragedies of rural Punjab. The very basic theme of the novel is class struggle which is prime motivation for Siddiqui’s entire fiction. Jangloos is the story of an escaped criminal who makes his way through life by theft, deception and murder. His unusual journey takes him to the abyss of the tyrannical structure of society.The author not only researched his topics in great detail before writing the novel but also studied the geography and culture of Punjab and also learnt to speak Punjabi and Saraiki. With such high credentials, Jangloos is undoubtedly a great novel and a masterpiece. Shaukat Siddiqui’s third and final novel Chaar Deewari was written alongside Jangloos and was finished in 1988. Through this gem of a novel, Siddiqui paid a rich tribute to his native Lucknow. Novel’s protagonist Talat Ara is a naïve young girl raised in the luxury and comforts of one such nawabi mansion. She is surrounded by dozens of female servants and jealously guarded by an overly superstitious and authoritative widowed mother. Talat Ara’s life is turned upside down when she happens to meet the prince royal of the realm of jinns in a supposedly haunted first floor room of the haveli. Every Thursday, the prince of jinns descends from his father’s kingdom to spend a night with Talat Ara and nor she nor her mother can refuse out of fear. Fortunately, Talat Ara is not damned for eternity. Later in the story she emerges as a strong character, a young woman who is receiving modern education and is aware of the treachery inflicted upon her in the name of superstition.Chaar Deewari with its interesting Arabian Nights like story, attention to detail and highly convincing characters emerges as a highly authentic and entertaining novel. The story of this novel is not limited to havelis; underprivileged and lower classes get due representation. Chaar Deewari is also praised for its feminism and strong female characters.

“Char Deewari” depicts Shaukat Siddiqui’s nostalgia for his childhood days in Lucknow. At an event in Doha, where Shaukat Siddiqui was honoured for his huge literary contributions to Urdu literature four years ago, he had been asked whether he had been to Lucknow since his migration from that city, he emphatically answered in the negative, saying he couldn’t have written `Char Deewari’ had he visited the present-day Lucknow.“I do not want to say goodbye to the Lucknow of my childhood days, and hence the novel. Lucknow, I know, has changed its peculiarities over the years, and it is not the same Lucknow which I knew and which still dominates my memories.” On Dec 18:Shaukat Siddiqui, one of the greatest writers of Urdu fiction in the modern era, died at his residence of cardiac arrest. He was 83. “He had a protracted heart problem. His condition deteriorated this evening and he died of cardiac arrest on the way to a private hospital at 5.30pm,” told by Zafar Siddiqui, the writer’s eldest son. He was survived by two sons and three daughters.
His funeral was held at Ali Masjid, Khayaban-i-Hafiz, Phase-VI, DHA. [4] death,tribute Throughout his career Shaukat Siddiqui remained true to his philosophy of life. He was an absolute realist. His themes were the bitter realities of life. He used a fairly simple language and wrote in Dastaan style. Readers could not only relate with his stories but find them interesting and entertaining. On the other hand, his craft of storytelling, his realism and attention to detail earned him critical acclaim. Being equally popular with literary critics and readers was his rare achievement. He has made a permanent place among greatest Urdu writers. Shaukat Siddiqui passed away in 2006. Ahmad Nadeem Qasmi and Munir Niazi also passed away that year. People say 2006 was a very unlucky year for Urdu.