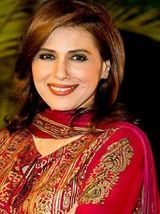 Seemi Pasha is an elegant and stunning Pakistani actress, Director and, producer who is attached to the Showbiz industry for a long time. She is a grandmother of 2 boys yet still looks young and fresh. This article contains a blend of all the information about her, including Seemi Pasha Biography and Seemi Pasha Dramas. Seemi Pasha is a graceful Pakistani actress who is known for playing the role of a mother in every next popular serial. She is the part of a Showbiz industry since 2007, and since then she is giving amazing performances one after another. Seemi doesn’t reveal her personal life yet is married to Zia Pasha, who is not the part of this glamour world. She is one of the most dignified grandmothers of this industry who is aging backward.

She was born on 5th January 1959 in Lahore. Currently, she still lives there yet also resides in Karachi for her work.

She holds the degree of graduation, which she attained from Lahore.