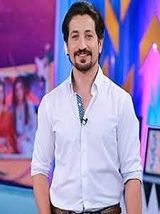 Salman is a good looking Pakistani actor and a model who has worked in many serials and few films. He belongs to an artistic family where his mother and siblings also belong to showbiz. He is best known for his supporting characters in all dramas. This article contains detailed information about him including Salman Faisal Biography, Salman Faisal Family and Salman Faisal Dramas. Salman is a young, dashing Pakistani actor and a model who is in the industry since 2014 and has accomplished himself a lot in these years. In spite of being born into an artistic family, he has achieved all the fame and love of people with his performances one after another. He is indeed a great addition in Showbiz and is giving a tough competition to all his fellow actors.

He was born on 1st July 1990 in Lahore where he spent his early life. Later the family moved to Karachi and still resides there.

He holds the degree of Bachelor’s that he attained from Lahore.

Salman belongs to a captivating and artistic family where good looks and talent runs in the genes. His mother Saba Faisal is a talented and stunner artist for ages while his brother Arsalan Faisal and only sister Sadia Faisal are also well-known artists of Television. He got engaged with Neha in 2017 and in February 2019 they both got hitched and is living a happy life.

Due to his captivating looks, he thought of starting his career as a model in 2014, he did modeling shoots for many top-class brands and worked in various commercials. Modeling became a path for his career and he soon stepped in acting.

He made his debut on a small screen with a drama serial ‘Rothi Rothi Zindagi’ which aired in Express entertainment.  In a TV serial ‘Be Aitebaar’ of Hum TV he has worked with his mother Saba Faisal and also shared the screen with his sister Sadia Faisal in another TV serial named ‘Apnay’ of See TV. He got huge popularity after his character of Tipu in ‘Dil mom ka Diya’ in which he performed remarkably along with Neelum Munir and few others.

He made his Lollywood debut in 2016 with a historic film ‘Saya e Khuda e Zuljala’ along with Moammar Rana, Javed Sheikh, Firdous Jamal, Noor Bukhari, and many other fine actors. Next year in 2017 he again appeared in the film ‘Thora Jee lai’ along with newcomers Ramsha Khan, Bilal Abbas and others but unfortunately, the film terribly failed to rule on the box office.