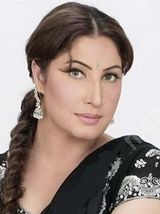 
Saima Noor is a talented Pakistani television and film actress who is known for showing her versatility in various Urdu and Punjabi movies. She has likewise performed multiple roles in many super hit dramas. Her husband, Syed Noor, is a talented Pakistani director who has directed various films and dramas. This article has all the information about Saima, including Saima Noor Biography and Saima Noor Family. Saima is a senior and accomplished Pakistani television and film actress and likewise a mesmerizing model. She is the part of the Showbiz industry for a long time, yet her charisma and beauty is unmatchable. Saima is considered one of the most charmer and consummate Pakistani artist who is still playing the lead roles even in her 50s. She had a dream of becoming an actress since her childhood that she turned into reality soon after completing her education at the age of 20 only.

She was born on 5th May 1967 in Multan. She hails from a Pathan family. Currently, she is residing in Lahore with her family.

Saima got married to Pakistani Director Syed Noor in 2005. Though the couple revealed this new in 2007 at a press conference. Both are happily married and living their best life. The couple is not blessed with any child.

Apart from a big screen, she is likewise seen on a small screen in various mega-hit serials opposite talented Faysal Qureshi and other actors. Her drama serial ‘Mubarak Ho Beti Hui Hai’ opposite Saboor Ali, Sajid Hassan, Sabreen Hisbani, and others received a huge recognition due to a strong storyline. She likewise appeared in another amazing serial, ‘Rang Laga’ opposite Faysal Qureshi, Neelum Munir, and Zhalay Sarhadi.

A few of her movies incorporate