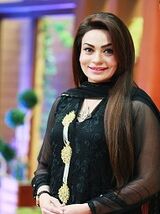 
Sadia Imam is a versatile Pakistani actress, model and host. She has acted in many PTV dramas. People like her because of her flawless acting and beauty. She has performed not only in dramas but also in music videos and TV commercials. After marriage with a German National, she moved to Germany but returned to Pakistan after a while. She is a gorgeous mother to an adorable daughter. This article has all the information about Sadia, including Sadia Imam Biography and Sadia Imam Family. Sadia is a talented and beautiful face of the entertainment industry. She worked with famous actors and actresses of her time and made her mark in a very short time. Whether it was a comedy role or a romantic role, she played each character well. Her on-screen chemistry with Humayun Saeed was exceptional. Apart from acting, she also ruled the hearts of people through modelling. Because of her humble nature and smiling face, she quickly wins people’s hearts. In 2019 the allegation she had imposed on Rahat Fateh Ali Khan made news headlines. She reiterated that she had penned lyrics of Rahat’s two songs ‘Zindagi Ye Safar hai’ and ‘Jiya Dharak Dharak Jaye’. The actress claimed I was a friend to Rahat and it’s my brain behind these songs. However, Rahat’s management team denied the allegations.

She was born on 27th October 1979 in Karachi. After being married with a German national, she left Pakistan as well as Pakistani showbiz industry. But she rejoined showbiz after her return from Germany and is currently living in Karachi.

As Sadia started working at a very young age, her education is uncertain.

Her elder sister Aliya Imam also belongs to showbiz. Aliya began her showbiz journey in the 90s, and her soap ‘Siraf Aik Bar’ gained accolades from the entertainment industry and viewers. She is mostly seen doing comic roles. In 2012 Sadia found her soul mate Adnan Haider who was a German national. So she left Pakistan and settled in Germany. In 2014 she became a mother to a daughter named Meerab.