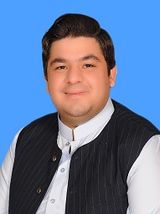 
Saad Waseem Sheikh is a Pakistani Politician who is serving as a member of the National Assembly while being attached to the Pakistan Muslim League N since 2018. This article contains all the information about him including Saad Waseem Sheikh Biography. Saad Waseem is a Pakistani politician who is associated with Pakistan Muslim League N since 2018 as a member of the National Assembly. He is one of the youngest Parliamentarian in the Assembly who started his political career when he was only 26 years old.

He was born in 1999 in Kasur, a city located to the south of Lahore when he spent all his life. Currently, he still resides there with his family.

He started his political career in 2018 when he ran for the seat of the National Assembly from the Constituency NA-137 (Kasur-I) while being attached to Pakistan Muslim League N in the 2018 Pakistan General Elections. He took charge on 13th August 2018.