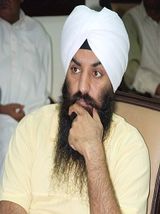 Ramesh Singh Arora first ever sikh who took oath as a Parliamentarian. He is currently a member of Pakistan Muslim League. Last year in October 2017 he suggested a law regulation the marriages of Sikh which today on 14th March 2018 has been passed with the support of Shehbaz Sharif and other Ministers. Mr Ramesh Singh Arora son of Mr R.L. Arora was born on October 11, 1974 at Nankana Sahib. He obtained the degree of MBA in 2000. He has been elected as Member, Provincial Assembly of the Punjab in general elections 2013 against one of the seats reserved for Non-Muslims and is functioning as Chairman, Standing Committee on Commerce & Investment. He remained Member of National Commission for Minorities during 2011-13; and also served as General Secretary, Pakistan Sikh Gurdwara Parbhandak Committee during 2009-13; and as Chief Executive, Mojaz Foundation during 2008-13. He has a vast experience of Community Development. He has served in RSPS; and in World Bank funded programme namely Pakistan Poverty Alleviation Fund. He is the first Parliamentarian in Punjab Assembly who comes from Sikh Community after 1947. He has visited India, UAE, Europe, Bangladesh and USA. [1] Biography Biography

Ramesh Singh Arora has been elected as Member of the Provincial Assembly of the Punjab in general elections 2013 against one of the seats reserved for Non-Muslims and is functioning as Chairman of the Standing Committee on Commerce & Investment. He is a part of Pakistan Muslim League ( Nawaz). He remained Member of National Commission for Minorities during 2011-13; and also served as General Secretary of the Pakistan Sikh Gurdwara Parbhandak Committee during 2009-13; and as Chief Executive of the Mojaz Foundation during 2008-13. He has a vast experience of Community Development. He is the first Parliamentarian in Punjab Assembly who comes from Sikh Community after 1947. He has served in Rural Support Programme Pakistan (RSPs); and in World Bank funded programme of Pakistan Poverty Alleviation Fund. He has symbolized Pakistan’s image about minorities’ rights protection at international forums. [2] Career Career History was made in the Punjab Assembly  when Sardar Ramesh Singh Arora in 2013 became the first Sikh in close to 67 years who entered into Pakistan’s biggest provincial assembly and took oath as a parliamentarian. Wearing a traditional orange-coloured turban, Sardar Arora walked into the packed assembly hall. Heads bearing warm smiles and broad grins turned in his direction and greeted the new member. A renowned social worker and leader of the Sikh community in Pakistan, Arora comes with a mission to use the shared religious linkages across borders to further peace and trade between Pakistan and India. Arora, who grew up in in a modest Sikh family from Nankana Sahib in Punjab, before his family moved to the Kartarpur district, Narowal to serve at the Gurdwara Kartrarpur as a Granthi. [3] First sikh parliamentarian

The Punjab Assembly created history on Wednesday 14th March 2018 as it passed a law, exclusively regulating the marriages of the ‘Sikh Community’ – making it the first time family matters of the community such as marriage will be regulated separately. The Punjab Sikhs Anand Karaj Marriages Act 2017 was first moved in the provincial assembly by Sardar Ramesh Singh Arora on October 24, 2017. After garnering support from Punjab Chief Minister Shehbaz Sharif and other ministers including Punjab Law Minister Rana Sanaullah and Parliamentary Sectreary and Punjab Minister for Human Rights Minorities Affairs Khalil Tahir Sindhu, the bill was presented before the assembly today. It was passed unanimously. [4] Sikh family law The Sikh community seemed overjoyed with the completion of the process of the bill and lauded the role of the Punjab government. They said it was a good omen which showed love and respect for their community members, adding it allowed them to protect family matters. Speaking to The Express Tribune, PML-N MPA Sardar Ramesh Singh Arora had highlighted that it was unfortunate that Sikhs had not been given a separate identity in terms of their family laws, even in India. Giving credit to the provincial government, Arora said it was the first time the family laws of Sikhs would be regulated separately. He added that it was necessary to define the law in order to regulate solemnisation and dissolution of Sikh marriages, provision of maintenance and the matters ancillary and incidental thereto.