By amnaDecember 3, 2019No Comments2 Mins Read 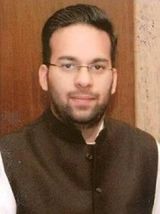 
Rais Nabeel Ahmad, who is a son of Former Federal Minister Rais Munir, is a Pakistani Politician. He is associated with PPP and is working as a member of the Provincial Assembly since 2018. He is a former UC chairman of Pakistan Muslim League N. This article contains all the complete information about him, including Rais Nabeel Ahmad Biography. Sardar Rais Nabeel hails from Rahim Yar Khan is a Young Pakistani Politician. He is currently executing his duties as a member of the Provincial Assembly after electing in Pakistan General Elections 2018. He is attached to Pakistan Peoples Party since 2018 after being served in Pakistan Muslim League N like his father, Sardar Rais Muneer. Being born in Rahim Yar Khan, he contests the elections from the same city.

Rais belong to a Political Family. His father, Sardar Raees Munir is likewise a Pakistani Politician and affiliated with Pakistan Muslim League N. He is a former Federal Minister.