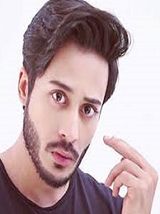 Noaman Sami is a fresh and indeed bewildering addition in the Showbiz Industry who is serving as an actor and model and is winning the hearts of people day by day. This article contains all the information about him including Noaman Sami Biography and Noaman Sami Dramas. Noaman is a young and handsome Pakistani actor and model who started his Showbiz journey a few years ago and has marked his place in the industry with his prodigious acting skills and appealing personality. He is one of those actors who have to struggle a lot to enter in this field without having any links. Rumors are around the corner that he is dating beautiful Alizey Shah yet both haven’t revealed anything publically.

He was born on 19th October 1990 in London where he spent all his life. Currently, he resides in Karachi for his work.

He received his education from the University of Bradford.

He gave his small screen debut in 2018 in drama serial ‘Gilla’ as a supporting character opposite Wahaj Ali, Anzeela Abbasi, Asad Siddiqui and Saman Ansari. The same year he got a chance to work in a superhit serial ‘Maa Sadqai’ of Hum Tv opposite Zainab Ahmad, Faiq Khan, and Afraz Rasool. He is all set to give his big-screen debut in the movie ‘Talaash’.