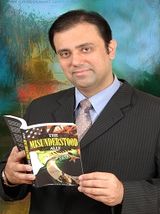 
Faraz Inam is a handsome and consummate Pakistani actor who is ruling the hearts of millions of people with his 2 characters as Captain Faraz. He currently resides in Dubai yet surprised everyone with his comeback in drama serial ‘Ehd e Wafa’ in 2019. This article contains all the information about him including Faraz Inam Biography, Faraz Inam Family and Faraz Inam Dramas. Faraz is one of those names from the Showbiz Industry that is hard to be forgotten. He is a Pakistani actor who just by playing 2 characters has made everyone his fan with his grace and charismatic personality for a lifetime. A 22 years old handsome man who never thought of joining Showbiz ever has given masterpieces to the people of every age group in the form of ‘Sunehrai Din’ and ‘Alpha Bravo Charle’. He fulfilled his dream of joining PAF by playing such characters in his series.

He was born on 9th October 1970 in Rawalpindi. He grew up in various cities including Abu Dhabi, Karachi due to his father’s job who was in PAF. Currently, he lives in Dubai with his family and visits Pakistan once in a year.

Being the eldest child he was sensible since his childhood. He did his schooling from different cities of the world and ended his school from Pakistani School in Abu Dhabi in 1986. He had a dream of Joining PAF as an engineering cadet but due to his weak eyesight he couldn’t make her dream come true. Later he completed his B.com in 1991 and took admission to the university of central Punjab, Lahore and did his MBA by securing 2nd position. Afterward he did his 2nd MBA from LUMS university and got a job in Bank that he never thought about.

He was born into the house of fighter Pilot due to which he became more passionate about PAF. Being the only son and elder brother of 3 younger sisters he had the sense of maturity in him that became him very curious about his career choices. In 1998 he got married to Marium and went to Dubai and started a life there. The couple is blessed with a daughter and a son.