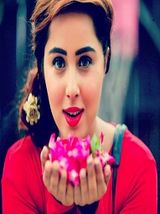 Nimra Khan is a beautiful Pakistani actress, Model who is also fond of singing and is blessed with an incredible voice. She started her career in 2013 and won the hearts of people in a short time with her powerful performances. This article contains all the information about Nimra Khan biography, Nimra Khan family and Nimra Khan dramas. Nimra is a stunning and one of the courageous and valiant actresses we have in our industry who has faced the toughest time of her life with full bravery and fearlessness. Her decision t to joining showbiz was unintentional as she never had any plans for it further she is the only one from her family who belongs to this profession. Who knew that the girl who spent all her life as a Tomboy will turn out to be a successful Pakistani Television actress. The way she has achieved success is worth praising and worth admiring.

She was born on 26th June 1990 in Karachi where she spent all her life with her family and still resides there.

She is an educated girl who did a bachelor’s in Film Making from the famous Arts school IVS (Indus Valley School of Art and Architecture) without having any intention of joining Showbiz. During her college tenure, she used to take part in functions and skits which encouraged her to join the showbiz field.

She was born to a supportive family where her father is a businessman while her mother owns her Salon. One of the many reasons for joining Showbiz was her father’s biggest support who emphasized her to join Showbiz. She has 4 sisters and one younger brother who is still a school going. Recently in an interview with Samina Pirzada, she divulged a little bit about her love life which she will fully reveal very soon.

On August 21, 2014, she met with a serious accident while returning from a shoot. Her vehicle which was gifted by her father a few days ago got hit gravely by a van as she fainted while driving. Her leg cracked from three distinct focuses while the doctors were not ready to fix them quickly as there were a couple of clusters in her mind. Because of this disaster, she needed to take a break for work so as to pull through from the injury. She had to go through the toughest time of her life where she had to bear the severe pains.

She is likewise a stunning model who has worked with many brands and has walked on ramp several times for various well-known designers. She often does bridal shoots where she looks incredible. She likewise has been seen in various Television commercials as a brand Ambassador of Coka Cola, Warid, Caninola and many others.

She is blessed with an incredible voice who often posts her music videos on her Instagram account. Her agreeable voice assembled an immense group around her when her first sentimental tune with Arslan Faisal hit the web-based social networking. After which she secured some different tunes. She had additionally completed a music video with Asim Azhar, melody Mahi Aja.