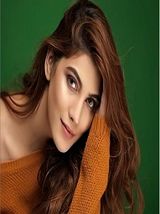 
Nazish Jahangir is a stunning and bold Pakistani model, actress and former designer who is part of the Showbiz Industry for a long time and is in the list of the most loved artists of the industry. This article contains all the information about her including Nazish Jahangir Biography, Nazish Jahangir controversies and Nazish Jahangir Dramas. Nazish is a beautiful and critically acclaimed Pakistani model turned actress who is associated with the showbiz industry for a long time. She maintained her position in the industry with her diligence, her beauty and her confident nature and soon became the talk of the town. She is one of those artists who are often involved in different controversies. This young lady made a universe of unrivaled excitement and her work can be found in a portion of style’s most imaginative fragments.

She was born on 28th April 1988 in Karachi where she spent all her life. Currently, she resides in Islamabad with her family.

After completing her Schooling from Karachi she did her intermediate and followed her passion which she always found in designing. She did fashion designing from Hunerkada College of Visual and Performing Arts and worked as a designer for a few times.

She is the one who never escapes herself by being in various controversies. Last year in 2018 she posted on her official Instagram account about the behavior of her careem driver that how he tried to kidnap her and how she escaped from there. Next year in 2019 on 20th July 2019 she again became the talk of the town when she was found in a relationship with Pakistani actor, singer Mohsin Abbas Haider. She was accused of being in an extramarital affair with him charged by his wife Fatema who posted a status on his official Facebook account. She further added that how her husband used to torture her on being asked about his affair with Nazish.