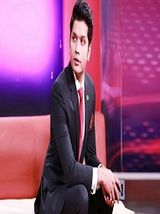 
Mureed Abbas is a Pakistani News Anchor who has worked with well recognized News Channels till now. He is one of the most liked and recognized News Anchors who speak whatever he wants to without any dismay. He took his last on 9th July 2019 due to shot down over a little dispute. This article contains a blend of information about him including Mureed Abbas Biography. Mureed Abbas Khar is a Pakistani Anchorperson who has been associated with various prominent news channels since 2007. Currently, he is affiliated with the BOL News channel where he is performing his duties as a content manager. He is indeed one of the most accountable and bold anchors who is being recognized internationally too who knows how to capture the attention of the people with his clear and high pitched tone. Originally hails from the Mianwali he currently resides in Karachi.

Mureed did his Schooling from Al Sehar School, Karachi. Later he went to Defence Authority Degree College, Karachi from where he completed his intermediate. Afterward, he decided to do Bachelor’s in Mass Communication due to his interest in journalism.

Mureed filled in as anchorperson on Samaa TV from June 2010  to January 2013  just as he has likewise worked in the Business Plus channel in a similar way from 2007 to 2009. By facing the camera with full confidence and ease, he is effectively welcoming each and every difficulty which is drawing in him more towards his career. After working in Samma Tv as an Anchorperson he moved to the news channel Ab tak where he performed his duties for a few years. Currently, he is serving as an Anchorperson likewise a content manager at BOL news.

The bold News Anchor Mureed is gunned down in Karachi on 9th July 2019 along with few other fellows in the Khayaban-e-Bukhari area over a little fight. According to Dawn News the culprit attempted to do suicide after this incident and has been taken to hospital after firing himself on the chest. According to one of his (mureed) friend the dispute was over money.