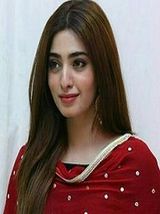 
Nawal Saeed is an emerging talent of the Showbiz Industry who is an actress and model since 2017. She joined Showbiz because of having an interest in art and music and became a part of the Showbiz after passing an audition. This article contains detailed information about her including Nawal Saeed Biography and Nawal Saeed Dramas. Nawal is a young and beautiful Pakistani actress and model who is fond of arts and has worked in NAPA for almost a year from where she did the training of music and learned how to play guitar. She is often seen doing supporting roles in various serials yet can grasp the attention of viewers with her innocent face and charming smile. In a few years, she has gained enough popularity and still struggling hard to mark her name in the industry as a lead role. Currently, she is single.

She was born on 29th October 1993 in Karachi where she grew up. Currently, she still resides there with her family.

She holds the degree of Bachelors that she attained from Karachi.

She made her small-screen debut in 2017 in popular drama serial ‘Yaqeen Ka Safar’ opposite Sajal Ali. Her side role in this serial was admired by everyone and later she started appearing in various serials. A few of his dramas incorporate ‘Aik Larki Aam si’ starring Anmol Baloch, Babar Khan, Fawad Jalal and Ismat Iqbal, ‘Maah e Tamam’ starring Ramsha Khan, Wahaj Ali, Naveen Waqar and Emmad Irfani and few other serials.