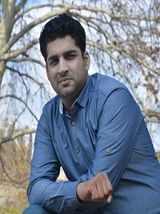 Mirza Ali Baig is a brave Mountaineer who has made all the Pakistanis proud by climbing 7 Summits in 7 continents along with his sister Samina Baig who is also  Mountaineer. He is also active in doing social works and has also written a documentary film on his sister who was the first Pakistani female to climb Mount Everest at the age of 21. This article contains all the information about him including Mirza Ali Baig Biography and Mirza Ali Baig family. Mirza Ali is a young and Valiant Pakistani mountaineer, photographer and social worker who is also a motivational speaker and often emphasizes on the women empowerment and for the rights and equality of women. He first climbed the mountain when he was hardly 16 years old since then he is living his passion and fantasy and is making everyone proud. For uplifting women and for their rights he also started a campaign where girls from all over Pakistan participated including his sister Samina Baig.

He was born on 10th July 1983 in Shimshal village, Hunza-Nagar District of Gilgit-Baltistan. He spent all his life thereby exploring different Mountains which developed a passion for him to become a Mountaineer.

He received his early education from his Village Shimshal. After 8th he moved to Gulmit town for his High School. During his studies, he also worked with foreign groups and started living his passion since he first climbed the mountain at age of 16 but he didn’t quit his education and went to Karachi to do his Bachelor’s in Commerce.

He is a brother of Samina Baig who made everyone proud by climbing Mount Everest in 2013 with the motivation and incitement of her brother. She also became the first Pakistani who climbed the Peak Chaskin Sar which is above 6000 meters. Both the siblings are doing wonders in their field.

He established a project with the name ‘7 Summits 7 Continents’. For Adventure strategy, interfacing individuals through Mountains, along these lines Mirza could unite 5 international safe havens to be bolster bunch as “Adventure Diplomacy Support Group” Mirza Ali went on this Diplomacy undertaking with his sister to vanquish the 7 most elevated tops in 7 mainlands and inside eight months Samina Baig vanquished each of the 7 Mountains while Mount Everest stayed to be vanquished by Mirza Ali which he conquered on 22nd May and became first Siblings ever in Pakistan to climb 7 summits in 7 continents.

His pictures as a photographer were shown by the US government office in Islamabad and his experience documentaries “SAMINA, Muhim Chashkin Sar” and “Ugli Rut ki Dastak” short film/limited time AD for Gender Equity are circulated from almost all standard TV directs in Pakistan. Mirza climbing missions are to achieve the summit as well as achieving a reason and mission, the substance of his climbings depend on Gender correspondence, ladies strengthening, his penance to permit his sister to the summit of Mt. Everest without him, when they were simply 248m short structure the summit is an incredible exercise of ladies strengthening to other individual Pakistani men.

He has done a lot of Social work along with his sister to empower more and more girls to help them fulfill their dreams and passion. A few years ago he initiates an NGO ‘Pakistan Youth Outreach‘ whose main cause was to boost gender equality through education and sports among the women of Pakistan. That NGO is giving training to the girls who came from all over Pakistan and is developing a sense of ability in them to achieve their goals. In 2011 he launched a school in Arandu which is giving education to young boys and girls free of cost. In January 2015 first since forever National Youth Skiing Camp was sorted out by Mirza Ali with solid help from Stephen Keck and Andreas Ehrensberger from Austria. Around 33 members from different pieces of Pakistan went to the ski camp.

He wrote his first Pakistani documentary film ‘Beyond the heights‘ in 2015 which was based on the life of his sister Samina Baig who was the first Pakistani woman who climbed Mount Everest at the age of only 21 with his support and encouragement. The documentary was directed by Jawad Sharif and produced by himself. The film highlights the dreams of a woman and her struggle which she did to achieve her goals with having all the obstacles.