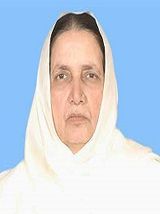 Nasim Akhtar is a Pakistani Politician and is serving since 2002 as a Member of the National Assembly. She remained affiliated with Pakistan Peoples Party (PPP) for a long time. Currently, she is no longer a part of politics.

She got married to late father Major (Retd) Mazhar Ali Abbasi who was an Army officer. Her only son Hamza Ali Abbasi is the considerable name of the Showbiz Industry who is an actor and director by profession and is one of the most cherished actors of the industry because of his looks and acting while her daughter in law Naimal Khawar is a Visual Artist. Her only daughter Dr. Fazeela Abbasi is a Dermatologist by profession.