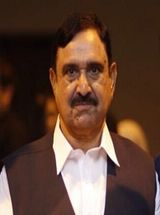 Mian Abdul Manan is a politician from Faisalabad. He is associated with Pakistan Muslim League Nawaz. Manan is known for his strong defense of his party on news channels. He is often found in political debates with his political opponents. This article has all the information about Manan, including Mian Abdul Manan Biography. He comes from an educated family and has been associated with Pakistan Muslim League Nawaz for long. He is one of the senior politicians of the party. In his political career, he has been elected twice as a member of the National Assembly. At one time, he was leading a group in Faisalabad when there was a split in the party in 2002.

He belongs to a family of Faisalabad. His father’s name is Haji Abdul Rehman. His son Irfan Manan is likewise serving as a politician. His brother Mian Abdul Hanan also belongs to the same field.

Mian Manan is often found loosing temper in media talks. In one of the interviews, the senior politician Shah Mahmood Qureshi refused to participate in the show due to the use of his language. Once he used harsh words with the female anchor, Paras Jahanzeb in a talk show. His party also had reservations against him. He was found running a campaign against one of the ticket holders of his party.