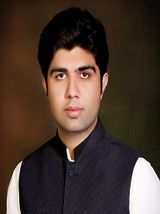 Khurram Sohail Khan hails from Muzaffargarh is a Pakistani politician and a landlord who is currently working as a member of the Provincial Assembly after winning the Pakistan General Elections while being attached to Pakistan Tehreek e Insaf. He was accused of submitting fake documents and for concealing his original age. He is a special advisor to the chief minister Usman Buzdar.

He did his Schoolng from Sadiq Public School. Later he went to Bahauddin Zakariya University, Multan, Pakistan from where he attained the degree of Social Sciences. He is also doing LLB side by side.

He belongs to a Political family background where his father Allah Wassaya Khan alias Chunnu Leghari Khan also served as a member of the provincial Assembly while his grandfather Sardar Alhaj Iqbal Khan Leghari has likewise worked as a special advisor to the Chief Minister of that time. He tied the knot on March 2019.