By tauseefanwarMarch 2, 2018No Comments2 Mins Read 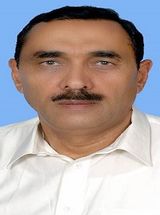 Khayal Orakzai also famous as Khayal Zaman Orakzai is a Pakistani politician.He is associated with Pakistan Tehreek-e-Insaf ( PTI).Khayal is currently a member of the National Assembly of Pakistan from June 2013. Khial Zaman Orakzai was born in Shna Warri, Tehsil Thall, District Hangu Khyber Pakhtunkhwa, Pakistan son of Mazar Khan. He is a PTI member.[1] Biography Haji khayal zaman orakzai a renowed politician.He joined PTI in 2011 with great honour and he was selected as the Senior Vice-President of PTI in KPK in inter party election. Later in he was elected by NA 16 (Hangu).[2] Hangu

Khayal Zaman is owner of Emaraat hotel in Peshawar and has property business.He has a net worth ₨1.89 billion, as of 2017.