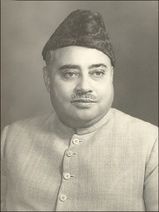 Khwaja Nazimuddin, a rich landlord and a nephew of Nawab Salimullah, was the product of Nawab family of Dhaka. His world was the narrow confines of the feudal aristocracy. He was bred if not born to lead Muslim Bengal but because of his background he was an anachronism in Bengalpolitics and its aspiration. His mother tongue was Urdu and Bangla was least known to him. He was the son of Khwaja Nizamuddin and Nawabzadi Bilkees Bano and was married to Shah Bano, daughter of Khwaja Ashraf in 1924. He was most outstanding and successful member of Dhaka Nawab family. He died on 22 October 1964and lies buried beside the graves of Fazlul Haq and Suhrawardi in the ground of Dhaka High Court. Their mausoleum is known as the Mazar of three national leaders. [1] Khwaja Nazimuddin – a rich landlord Nazimuddin had everything. He had the introduction of a great family. He had wealth that freed him from abrasion against the tough world. He had the education from the celebrated universities and a cultivated mind, a blend of eastern and western thoughts and ideas. His personality was an integrated whole composed of seemingly divergent traits.  He was a born aristocrat, but he remained singularly free from the foils and foibles associated with the landed aristocracy. He was a man of faith and fidelity, veracity and sincerity, urbanity and simplicity. In fact, to him word was honour. He had great love for Islam and its traditions. There was not a trace of pride or superciliousness in him. [2] His personality was —   an integrated Khwaja Nazimuddin entered in politics with determination, properly educated and equipped for it. The politics that he professed and practised was clean and fair. He knew how to win and how to lose with grace. In political life he was distinguished by two qualities, consistency and loyalty. His political faith and stand was throughout consistent. He constantly kept these twin objectives before him. Though, he was a nice little man, but not outstandingly resolute or strong. He was straight in politics but ineffective. He was always known to be a weak and nervous man, and his brother Khwaja Shahabuddin was supposed to be the brain behind him. But his handicap in politics was his nobility which, combined with the softness of his temperament. Though, his apparent solemnity concealed his self doubt and inadequacies.Khwaja Nazimuddin was a less sparkling, but one of the most popular figures in the political history of Pakistan in its formative phase. He belonged to the rare breed of politicians, against whom never a single charge of corruption or misuse of power levelled, despite of his extended stay in public offices. His unquestioning loyalty and commitment, sincerity and nobility of heart were the celebrated features of his personality and politics. Although, he was indecisive, less-efficient, less-forceful, and less-ambitious administrator. But his handicaps proved to be the merit of his selections in high political offices.[3] Khwaja Nazimuddin – a less sparkling

Nazimuddin belonged to an elite family and his life was full of honours and triumphs, but more than that all his career was notable for the nobility of his heart and conduct. The numerous victories, he scored and the highest offices as well as titles of great honour which were bestowed on him right from 1922 to 1953. It was the early twenties, when Nazimuddin started his career as Chairman of the Dhaka Municipality in 1922, a position he held till 1929. During that time, he was also a Member of the Executive Council of Dhaka University. For his good work at both these institutions, in 1929 he was appointed a Member to the Governor’s Executive Council.  He continued to serve in this capacity till 1937. He was elected a Member of Bengal Legislative Assembly from Barisal Muslim constituency in 1923, 1926 and 1929 and was the Education Minister of united Bengal from 1929 to June 1934 and later as Minister for Agriculture. In the former capacity he successfully piloted the Compulsory Primary Education Bill; removing disparity that existed in education between the Hindus and the Muslims. As Minister for Agriculture in 1935, he piloted the Agriculture Debtors Bill and the Bengal Rural Development Bill which freed poor Muslim cultivators from the clutches of Hindu moneylenders.[4]  Nazimuddin position – held till 1929 In 1937 he was appointed Home Minister in Haq’s Coalition Ministry. On1 December 1941, he resigned from the Cabinet because of differences between Haq and Jinnah. Fazlul Haq was expelled from the League and his Ministry way to another Ministry in coalition with the Congress members. During the Shyama-Haq Coalition (1942 to 1943), Nazimuddin acted as the Leader of the Opposition. On 24 April, 1943, Muslim League formed the Ministry with Nazimuddin as the Prime Minister on the fall of Haq Ministry on 28 March 1943. The circumstances were unpropitious. The spectre of famine was increasing the fair in Bengal. Nazimuddin and his Ministry boldly faced the situation and resolutely set themselves to the task of overcoming the famine. Due to the machinations of the opposition and the shifting loyalty of some elements, the Nazimuddin’s Cabinet was dissolved on 28 March 1945 and he lost Chief Ministership to Suhrawardy. However, he remained a member of the all India Muslim League Working Committee from 1937 to 1947.[6] he appointed Home Minister – In 1937

In 1946, Nazimuddin was elected a member of the Central Legislative Assembly in New Delhi and was appointed Deputy Leader of Opposition. That reflected the trust and confidence bestowed on him by the Quaid-i-Azam at that very critical juncture. Throughout this period of struggle, Nazimuddin remained one of the Quaid’s trusted colleagues. The nation and the leaders of the Muslim League did not forget his sincerity to the cause of the Muslims of India and to the Muslim League. Within the formation of Pakistan he became an important part of the early governments. He was appointed Chief Minister of East Bengal after the creation of Pakistan on 14 August 1947. In the contest for leadership, Nazimuddin was supported as against Suhrawardy by the Central League leadership, because of Suhrawardy’s involvement with the united Bengal movement, and his association with Gandhi.

Many factors had contributed to Nazimuddin’s ouster from the Prime Ministership. The poor state of economy, issues of constitutional, political and foreign policies, the Punjabi-Bengali rivalry, the anti-Ahmadi movement were some of the more important reasons. However, the unconstitutional and undemocratic dismissal of Nazimuddin as Prime Minister of Pakistan was a serious blow to the development of democracy in Pakistan.[7] serious development  —   of democracy In June 1953, Nazimuddin resigned from the post of the Presidentship of Muslim League and kept himself aloof from active politics, and stayed at peaceful vicinity of his daughter’s home. In 1958 he was awarded by the title of Nishan-i-Pakistan. He refrained himself from politics and led a life of retirement until 1962. But, in 1963 he returned to politics and became the President of Pakistan Council Muslim League. He devoted his energies for the revitalization of Muslim League. He struggled hard for the restoration of democracy and protection of fundamental rights and rejected the dictatorial attitudes of Ayub’s regime. He was a great patriot, he strongly resisted the secessionist tendencies in East Pakistan at the cost of his own popularity. He played a leading part in obtaining Miss Fatima Jinnah’s consent in becoming presidential candidate of the opposition political parties. [8] he was awarded – Nishan-i-Pakistan. History will remember him as a gentleman and a man of virtue though not great. His loyalty to his political masters and his birth in the Nawab’s Family of Dhaka, were the elements of his success. His paralysis of will to act even at times of emergency and his unimpressive personality were the reasons of his failure. He lacked the charisma of a leader and could not fascinate the populace. No doubt, he had his shortcomings, but they were the defects of his qualities. He was well aware of his flaws but was not willing to play dirty tricks simply for the sake of power.He was not morally corrupt and power hungry, he never aspired or conspired for power, it always bestowed upon him as a reward of his loyalty and sincerity, while, his political rivals used every fear and foul means to grasp power. Although, he lacked the qualities of a shrewd politician, a resonant and visionary leader, but in human qualities of piety, honesty and dignity, he was out standing.[9] His loyalty to his —     political masters