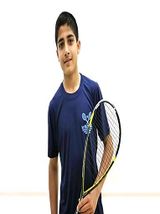 
Hamza Khan is unstoppable Pakistani Squash Player who has won various titles till now and has remained the part of many fierce battles. He is aiming for many more victories in the future and wants to make his country more proud. He is a champion who hails from Peshawar. This article has all the information about Hamza, including Hamza Khan Biography. Hamza is a young and extremely talented Pakistani squash player who has made everyone proud by winning the title of British Open under 15. He has won numerous gold medals at a minimum age with his talent and capabilities. He has never loose any of the game till now. Hamza is an encouraging and optimistic player who is representing Pakistan all over the world at a minimum age.