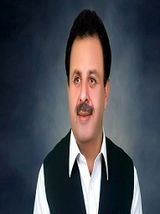 
Akbar Ayub Khan is a Pakistani Politician and is serving as Minister of Education since 2020 after the shuffling in KPK ministry. He is a former Minister of Communication and works department. He hails from village Rehana from Haripur district. This article has all the information about Akbar Ayub, including Akbar Ayub Khan Biography and Akbar Ayub Khan Education. Akbar Ayub is a Politician of Pakistan and businessman who is serving as a part of the provincial assembly since 2018. He is attached to Pakistan Tehreek e Insaf for a long time and is working as a dedicated politician of Khyber Pakhtunkhwa. He is a former advisor of the Communication and Work department, and despite the low education, he is heading towards success with time. Ayub Khan is married and blessed with two children.

He was born on 17th July 1971 in Village Rehana from Haripur. He spent all his life there and currently contesting the elections from the same village.

He passed his matriculation from the Army Burn Hall College, Abbottabad. He faced immense criticism after becoming Minister of Education due to his education.