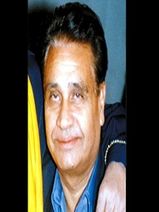 Ghayyur Akhtar was a Lahore based theater, radio, TV, and film actor who started his artistic career in the 70s’ and worked on PTV for more than 30 years. Before his death, he was hosting a program ‘Lahore Lahore Hai’ from Radio Pakistan Lahore while his famous stage drama ‘Kut Katarian’ was being shown in Al-Hamra Hall. This article has everything about him, including Ghayyur Akhtar Biography.

Due to his natural acting, he left an indelible mark of his art. He acted brilliantly in countless stage, radio, TV dramas and films. Because of his negative and aggressive roles, the audience gave him the title ‘Chaudary.’  He was a man with multiple skills and showed his skills in many art fields, including comparing, hosting, and acting.

In recognition of his artistic talent, the Government of Pakistan awarded him the Presidential Medal of Excellence on August 14, 2008.

His brother Zal Subhan was also a renowned artist, and his son Hamza Ghayyur is also trying to establish him in the world of entertainment.

His elder brother Zal Subhan introduced him to the theater, and he first appeared in a play by director Iqbal Affandi in 1970. However, the PTV drama serial Sona Chandi rose him to fame. In this drama, his dialogue Oho became famous.

In 1968 he started his career on radio and worked in different radio sections, including drama, documentaries. , comparing, and propaganda. He did compare a hit program ‘Sohni Dharti.’ In recognition of his radio services, he was declared as Radio Pakistan’s outstanding artist in 1998. He was the only artist who enjoyed rating in comparing and drama simultaneously.

He was also cast in several films by the late Shabab Kiranvi, but Akhtar soon returned to theater and TV dramas. His role as a jailer in the movie ‘Direct Hawaldar’ was well received.

He spent a paralyzed life for three years, and then one day on the sudden deterioration of his condition, he immediately admitted to the hospital. He was buried in Mian Mir Cemetery in the presence of hundreds of mourners. A widow and two sons survive him.