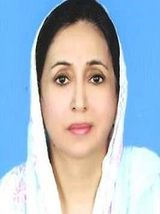 Firdous Rahna also known as Firdous Rai is a Pakistani Politician who is serving as a member of the Provincial Assembly while being attached to Pakistan Tehreek e Insaf for a long time. She got the party ticket of Punjab Assembly for the first time. This article contains all the information about her including Firdous Rahna Biography. Firdous Rai hails from Faisalabad is a Pakistani Politician who is currently functioning as a member of the Provincial Assembly after winning Pakistan General Elections while being affiliated with Pakistan Tehreek e Insaf. She is a devoted politician who is working hard to serve her post with full diligence and truthfulness. She has also worked as a regional president of women wing west Punjab.

She ran for the seat of the Provincial Assembly for the first time in 2018 Pakistan General Elections on a reserved seat for women from the Constituency W-304 while being attached to Pakistan Tehreek e Insaf. He holds the charge on 15th August 2018 and appointed as a regional president of women wing west Punjab. She has likewise served as a member of Human Rights and Minorities Affairs.