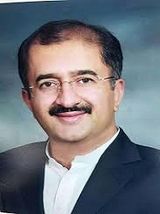 Fateh Khaliq also is known as Malik Fateh Khaliq Bandial is a Pakistani Politician who is serving as a member of the Provincial Assembly while being attached to Pakistan Tehreek e Insaf for a long time. This article contains all the information about him including Fateh Khaliq Biography. Fateh Khaliq Bandial hails from Khushab is an agriculturist and a Pakistani politician who is currently functioning as a member of the Provincial Assembly after winning Pakistan General Elections while being affiliated with Pakistan Tehreek e Insaf and is serving for the very first time. He is one of the dedicated politicians who worked hard to get the ticket of Punjab Assembly. He is married and is blessed with 2 Children.

He holds the degree of Matriculation that he attained from Khushab. Later he went to Government College Lahore from where he completed his further education.

He ran for the seat of the Provincial Assembly for the first time in the 2018 Pakistan General Elections from the Constituency PP-82 (Khushab-1) while being attached to Pakistan Tehreek e Insaf and gave defeat to his opponent. He holds the charge on 15th August 2018. He is working as a Parliamentary Secretary of specialized Healthcare and Medical Education.