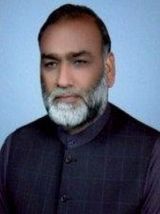 
Faqeer Hussain Dogar is a Pakistani Politician who is serving as a member of the Provincial Assembly while being attached to the Pakistan Muslim League N since 2013. He is one of the educated Politicians who holds the degree of Bachelor of Art. This article contains all the information about him including Faqeer Hussain Dogar Biography. Chaudhry Faqeer Hussain Dogar hails from Faisalabad is a Pakistani politician who is currently working as a member of the Provincial Assembly while being attached to Pakistan Muslim league N after winning the Pakistan General Elections. He s an agriculturist who has worked as a Councillor, Municipal Corporation Faisalabad and as a City Nazim District of Faisalabad.

He was born on 1st March 1959 in Faisalabad. Currently, he still resides there with his family from where he also contests the Elections.

He holds the degree of Bachelor of Arts which he attained from Government Islamia College, Faisalabad.

He ran for the seat of the Provincial Assembly for the first time in the 2013 Pakistan General Elections after being associated with Pakistan Muslim League N from the Constituency PP-67 (Faisalabad-XVII). Previously he has also served as Councillor, Municipal Corporation Faisalabad and as a City Nazim District of Faisalabad in the early 90s. He was also the Chairman of the Bait-ul-Maal Committee, District Faisalabad. After completing his tenure he is again chosen as a member of the provincial Assembly in 2018 Pakistan General Elections from Constituency PP-116 (Faisalabad-XX).