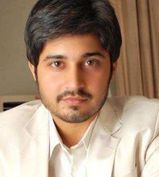 Babar Khan is a Pakistani TV Actor and Model. He is best known for his role, in Hum TV serial Ek Tamanna Lahasil Si which earned him a nomination for best supporting actor at 1st Hum Awards.Khan was born to a Muslim family in Lahore, and attended Bahria College, Karachi for education.[1] education  education Babar Khan is well known Pakistani actor and model. He born on 22nd Feb,1985 in Lahore. He is 32 now. He acquired his education from Bahria College Karachi. He is married and father of two childs,one son and one daughter. His first wife Sana who is also a TV actress, got died in an accident and after a year of her death, Babar got married again with his cousin Bisma. His star sign is Pieces. His childrens names are Ibrahim khan and Mariam khan.

Babar Khan joined showbiz at very young age as a model. He has handsome looks with confidence which earned him success as a model in short time. Soon Babar Khan became one of the successful male models of Pakistan.[2] pakistan model Babar Khan got married twice, her first wife was a model/actress Sana Khan, got married in 2014, after her death in car accident, he got his second marriage with a teen age girl Bisma Khan in 2015.

Sana Khan was with her husband Babar Khan on her way back to Karachi from Hyderabad, it was Friday, March 7, 2014. Probably her husband was driving the car. Suddenly the car overturned as he might be driving with much speed and they met a very serious accident near Looni Kot on super highway almost 30 kilometers from Hyderabad. Both sana khan and babar khan were badly injured and they were bleeding. Soon after receiving the news of the accident, the police and the ambulance reached the affected spot in a short span of time and they were both shifted to Liaqat University Hospital, Jamshoro. In the hospital, she could not survive to those injuries and succumbed to her scratches before even getting any medical aid whereas her husband had been in extreme critical condition. He was in hospital and battled for his life. It is all about their fate that the couple could not get along for long rather they lived together only for some months. She passed away and he survived.The whole family of couple went in shock; no one could believe all that happened with the blink of an eye. One moment they were happy, living, the other moment things had turned strange. Even all the celebrities were shocked and sorry to hear the news.The whole experience left this actor so shaken that he did not even give any interviews after that even though many talk show hosts wanted to interview him.[5]sana’s death

Babar Khan married Bisma Khan in 2015. Bisma Khan is cousin of Babar Khan and she was studying in school when they get married. Now they are parents of a baby girl and a boy named Mariam and Ibrahim respectively. Babar Khan has moved on and he has started acting again on TV.

For the first time Babar khan discusses Sana Khan’s death and how his 2nd wife helped him recover from it in Shaista wahidi’s morning show.In a recent morning show, Babar Khan was invited by Shahista Lodhi, where he was asked to talk about his first marriage, the car accident, how he overcame the trauma and how his family had supported him throughout his painful journey. He also shared an account of his individual experience.[6] Shiasta’s show People are debating if talking about his first wife infront of his second wife was okay or not. Furthermore, now that he has moved on was discussing the same painful incident (Sana Khan’s death) a wise decision… During the show, big picture frames from his previous marriage (with Sana Khan) were seen hanging on the walls of the studio (right before calling his second wife and children on stage) which was deemed insensitive.