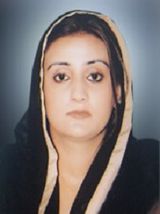 
Azma Bokhari is a Pakistani Politician who is serving as a member of the Provincial Assembly while being attached to the Pakistan Muslim League N since 2013. She is one of the educated Politicians who attains the degree of LLB and is a practicing Lawyer. This article contains a blend of information about her including Azma Bokhari Biography and Azma Bokhari Family. Azma Zahid Bokhari is a Pakistani Politician who is serving as a member of the Provincial Assembly for a long time. Currently she is associated with Pakistan Muslim League N like her husband Sami Ullah Khan who is likewise a Pakistani Politician and is attached to PMLN as a candidate of the Provincial Assembly. Other than a politician she is also a practicing lawyer. She has served as a Parliamentary Secretary for Culture & Youth Affairs in the past and has proved herself as one of the most dedicated politicians.

She was born on 18 August 1976 in Faisalabad where she spent all her life.

After completing her early Schooling from Sheikhupura School she went to the Punjab University, Lahore from where she attained the degree of Bachelor’s in Arts. Later she went to Pakistan College of Law from where she did Bachelor of Law and has practice Law.

She was born to Syed Zahid Hussain Bokhari who served as a justice of Lahore High court in the past. Her Husband Sami Ullah Khan is also a Pakistani Politician who is associated with Pakistan Muslim League N for a long time and is currently serving as a member of the Provincial Assembly.