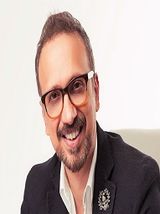 Asim Raza is a talented Pakistani director and a producer who has directed and produced a number of Television commercials, Music Videos, Telefilms and Feature Films. He has his own production house named ‘The vision factory’ This article contains all the information about him including Asim Raza biography and Asim Raza films. Did you know that he is son in law of former resident of Pakistan Pervaiz Musharaf? Asim is a versatile and accomplished Pakistani television and film director and a producer who is in the industry for a long time and has contributed a lot with his talent. He has directed and produced many Music videos, television commercials, and a few Pakistani films till now. He is considered to be one of the most successful directors of Pakistan with whom every artist loves to work with. Before making his waves into the production and direction side he has worked as an architecture too.

He was born on 21st August 1966 in Karachi where he spent all her life. He also lived abroad for his education but currently, he resides in Karachi with his family.

He belongs to a liberal and non artistic family. A few years ago he got married to Ayla Raza who is the daughter of former president and Army Chief of Pakistan Pervez Musharaff. Ayla is also an architect by profession who is currently working for a non-profit organization in Karachi. The couple is blessed with 2 daughters Maryam Raza and Zainab Raza.