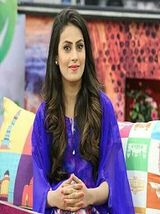 
Aroha Khan is a stunning Pakistani actress, model and designer who kicked off her career in 2014 in a drama serial ‘Babul ki duaein leti ja’ as a supporting actress. She is the only one from her family who belongs to the Showbiz Industry. This article contains a blend of information about her including Aroha Khan Biography and Aroha Khan Dramas. Aroha is a talented Pakistani actress, model and designer who is known for her supporting roles in different serials. She has her own outlet with the name Ak collection. She doesn’t belong to an artistic background so whatever she has achieved today is her own diligence and dedication towards her work. She is unmarried and fully focused on her career.

She was born on 12th July 1996 in Karachi where she spent all her life. Currently, she resides in the same city with her family.

She holds the degree of Bachelors which she attained from the University of Karachi.