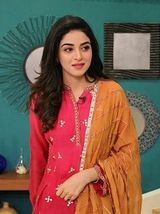 
Anmol Baloch is a good looking Pakistani actress and a model who has worked in a few Pakistani serials as a supportive actor and has established her position in the industry. She is expanding her fan following with her powerful performances one after another. This article contains all the information about her including Anmol Baloch Biography and Anmol Baloch Dramas. Anmol is a stunning Pakistani actress and a model who is establishing herself in the Showbiz Industry since 2016. Though she is new in the industry yet the few dramas where she gave her presence are worth admiring and worth appreciating. She has made millions of followers over all these years with her talent without having any artistic background. The performing artist is well known for her acting, enchanting and great looking style. She is still single and has no plans for marriage yet.

She holds the degree of graduation which she attained from the University of Karachi. Soon after completing her education she stepped into the Showbiz industry.

Like many other actresses, she too started her Showbiz career as a Model later stepped into the acting field. She has worked with many best brands and style fashioners of Pakistan and has been seen in many television commercials. Her sharp and classy looks made it very easy for her to become a supermodel. After establishing herself in the modeling field she decided to rule the television screens with her acting.