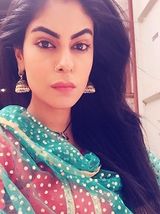 
Amar Khan is a prominent name in the Showbiz Industry who has won the hearts of people with her on-point acting skills. She is an actress, director and also a writer who has studied filmmaking. She is a daughter of a legendary Pakistani actress Fareeha Jabeen. This article contains a blend of information about her including Amar Khan Biography, Amar Khan Family and Amar Khan Dramas. Amar is a fresh face of the Entertainment Industry who has marked her name in a short span of time. She is in the industry for a few years and is fitting herself into the category of best actresses of Pakistan. In spite of being born in an artistic family, she managed to win the hearts of people and to make her name in the industry with her own diligence and talent. She was born in Lahore where she spent all her life but currently, she resides in Karachi for her work. She is unmarried and fully focused on her career.

She is one of the educated actresses we have in the industry who after completing her schooling and intermediate, went to the Beaconhouse National University, Lahore from where she completed her graduation in Filmmaking. Soon after completing her education she stepped into the Showbiz Industry.

She is a daughter of Legendary and all-time favorite Pakistani actress Fareeha Jabeen who is recently be seen in the most loved drama serial ‘Suno Chanda 2’. She is active in the industry since 1990 and has been a part of many Pakistani dramas and movies.