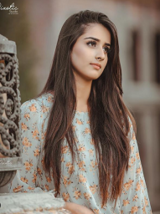 Alishba Anjum is a stunning Pakistani Tik Toker known for making videos on ‘Tik Tok.’ She aspired to become a Pakistani actress. Her stunning face and astounding expressions will make her a big star one day. Her sister Jannat Mirza is likewise talented Tok Toker. This article has all the information about Alishba, including Alishba Anjum Biography and Alishba Anjum Family. Alishba is one of the stunning and popular Pakistani Tik Tok star who has received immense popularity and appreciation quickly. She rose to fame after started lip singing videos on popular social media app ‘Tik Tok.’ She dreams of making an appearance in Pakistani television dramas and movies that is soon going to happen due to her talent and popularity. At a young age, she is being recognized by millions of people. She is one of the most followed Tik Tokers whose admiration is increasing with time.

She was born on the 1st October 1990s in Faisalabad. Currently, Alishba is residing in the same city with her family.

She is a student of 2nd Year that she is attaining from Punjab College, Faisalabad.

Alishba rose to fame after her Tik Tok videos became viral on the social media platform. She is a dream girl of millions of hearts, and at a young age, she is achieving the heights of success through a single platform. In 2019 her debut short film ‘Baba Ji Ki Booty’ released on youtube opposite Jannat Mirza, Saleem Miraj, and Zulqarnain Sikandar. She is likewise running her Youtube channel that has various subscribers.