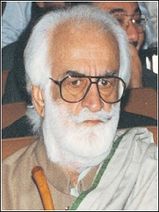 On July 12th 1927 Akbar Bugti was born in Barkhan, Balochistan at the home of  Nawab Behram Khan Bugti. Since childhood, Akbar Bugti was destined to be a great and brave man.  He eagerly perused education and was dedicated to his studies, In addition to his early education at Aitcheson College, Lahore.  Akbar Khan Bugti also attended Oxford University in London England.  After the death of his father in 1939, the thirteen year old Akbar Khan Bugti was appointed as chief of his tribe.[1] Mini Bio –  Mini Bio Nawab Akbar Khan Bugti went on to pay an important role in Balochistan politics.  He began his political career when elected in a by-election to the National Assembly of Pakistan in 1958, serving as Interior Minister of State.  In October of the same year President Iskandar Mirza declared martial law and dismissed the cabinet.  In the early 1960’s Akbar Khan Bugti supported the National Awami Party candidate for the National Assembly from Quetta division and he was elected with great number of votes.  The defeated Field Marshal Ayub Khan was offended by the young Khan’s public endorsement of his political opponents and ordered to jail Akbar.  Akbar Khan Bugti remained imprisoned until his release in the mid 1960’s after a lengthy hunger strike. His political career started in 1960 when he joined National Awami Party. But he couldn’t participate in the 1970 elections because of a case of murder filed against him. Due to some differences, Bugti left NAP and supported Bhutto. He met Bhutto in Masco and accepted his offer for the post of Governor of Baluchistan. Nawab Bugti, however, demanded non-interference of the central government in the provincial politics. He held that office for only eight months and then he went to London. After a long absence from politics, he participated in the 1988 elections on the ticket of BNM and became Chief Minister. Once again he held that position for a short period.[2] Joined National Awami Party

As a Governor of Balochistan In 1990 he decided to establish his own political party ‘Jamhuri Watan Party’. Many members of BNM joined JWP under the influence of Nawab Bugti. Three times he was elected as the member of the National Assembly. In 1992, Bugti’s young son was killed and as a result Bugti left all political activities and came back to his native place ‘Dera Bugti’. “Nawab Akbar Khan Bugti was killed in the operation along with some family members,” federal minister for information Mohammad[3] Death –  Death

“Yes, I confirm the death of Nawab sahib in the operation,” Senator Agha Shahid Bugti, son-in-law of Nawab Bugti, confirmed to Dawn late Saturday night, adding that he had no information about other causalities.