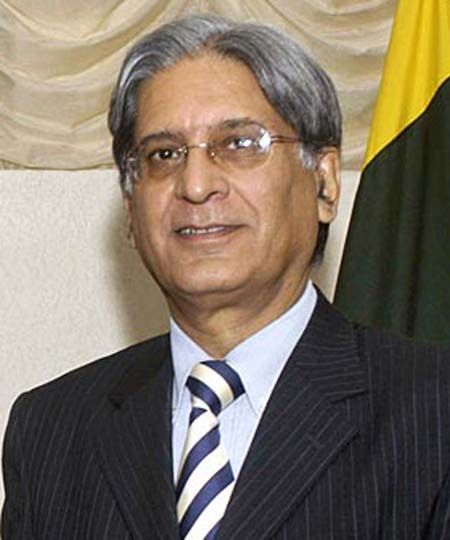 Â Â Â Â
Chaudhry Aitzaz Ahsan born 27 September 1945 is a Pakistani barrister, veteran activist-politician, constitutional theorist and a left-wing statesman who serves as the Leader of the Opposition in the Senate of Pakistan.Ahsan is a has been a member of Pakistan Peoples Party since 1975 when he become the Planning and Development Minister for Punjab. After the Operation Fair Play Ahsan became a prominent figure of the Movement for the Restoration of Democracy. Ahsan was elected to the National Assembly from Lahore in 1988, he was again elected to the National Assembly in 1990 and 2002, while served in the senate between 1994 till 1999.Ahsan served twice in the cabinet of Benazir Bhutto between 1988 till 1990 and 1993 and 1996 as first the Interior minister of Pakistan and then as the Minister for Law, Justice and Human Rights. After the assassination of Benazir Bhutto Ahsan became distant member of the Peoples party, however he was elected as Senator in 2012 and his wife was awarded party ticket to contest 2013 general elections, which she lost.
Ahsan served as the president of the Supreme Court Bar Association of Pakistan, he was also the de facto leader of the popular Lawyers' Movement which lead to the restoration of an independent judiciary in Pakistan, during which he was jailed several times. As a senior member lawyer, Ahsan has represented the case of several prime minister's including Nawaz Sharif, Benazir Bhutto and Yousaf Raza Gillani, also of formar chief justice Iftikhar Muhammad Chaudhry.[1] Aitzaz Ahsan biography 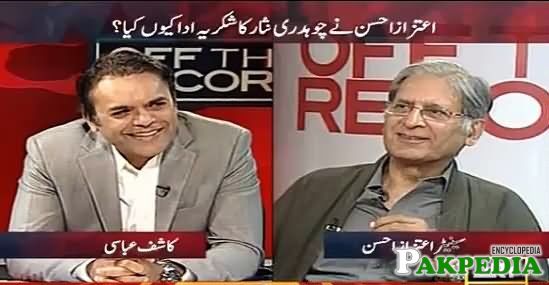 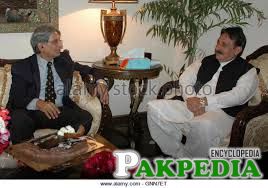 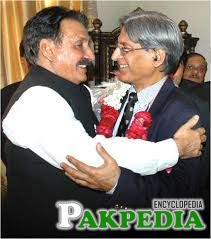 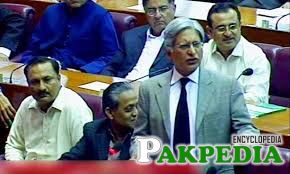 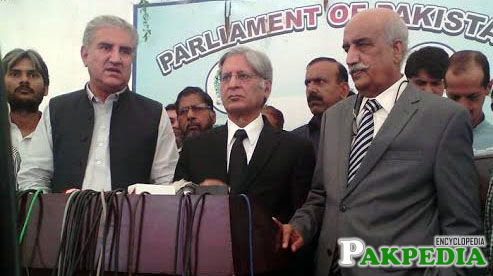 Born on September 27, 1945 at Murree, Islamabad, Pakistan. Barrister Chaudhry Aitzaz Ahsan comes from a background steeped in politics, being the third generation from his family to serve as an elected member of a legislative assembly. Married, he is the father of two daughters and a son. After his early education at Aitcheson College and the Government College in Lahore, he studied law at Cambridge and was called to the bar at Gray Inn in 1967.Upon his return from Cambridge, he appeared for and topped the prestigious Central Superior Services examination.Â [2] Early life and education

He and Bilawal Bhutto Zardari both became prominent members of the Pakistan Peoples Party. 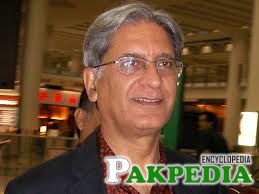 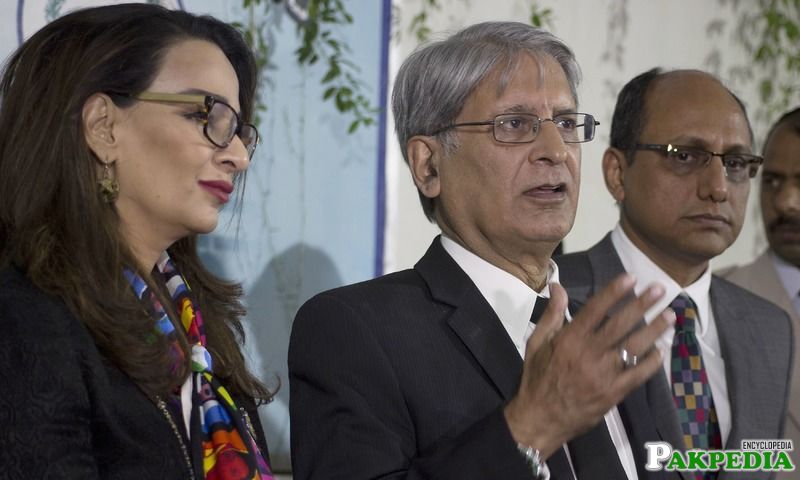 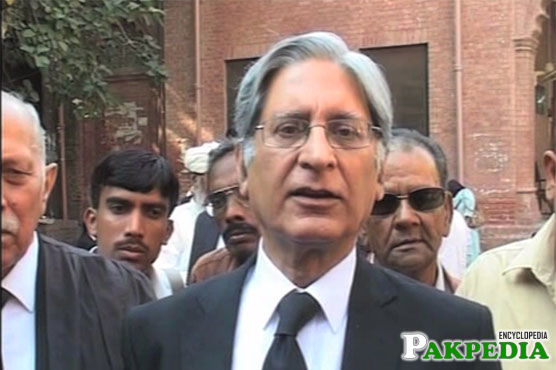 Â Â  He started his political career in the 1970s when he held the portfolio of Punjab information planning & development minister during Pakistan Peoples Party (PPP) government in 1970s. A senior PPP leader, he has served as the minister for law, justice, interior and education in the federal government between 1988 and 1993. Elected to the Senate of Pakistan in 1994, he was successively the leader of the house and the leader of the opposition between the years 1996 and 1999. He was jailed several times as a political prisoner without trial for active participation in the Movement for Restoration of Democracy. He is a senior advocate in the Supreme Court of Pakistan. He is also an indefatigable human rights activist and a founder vice-president of the Human Rights Commission of Pakistan. He has been incarcerated under arbitrary detention laws many times by military and authoritarian regimes. During one such prolonged detention, he wrote The Indus Saga and the Making of Pakistan and its Urdu translation, Sindh Sagar Aur Qayam-e-Pakistan which present the cultural history of Pakistan. Elected Member of National Assembly thrice on a PPP ticket, he is one of the countrys most respected politicians for his eloquent and articulate speeches on the floor of the assembly and his knowledge of the law. He also made legal history of sorts by having defended two opposing prime ministers in the court of law. Having previously fought cases in defense of PPP Chairperson Benazir Bhutto in 2001, he took up a case in defense of former Prime Minister Nawaz Sharif. He also represented Chief Justice of Pakistan Justice Iftikhar Muhammad Chaudhry when the-then President General Perez Musharif filed a reference against him with the Supreme Judicial Council. This may be the most remarkable thing in his life.In October 2007, he was elected president of the Supreme Court Bar Association.Areas of his legislative interest include constitutional remedies, corporate reform and human rights. He has been member of the National Assemblys standing committees on interior and public accounts.A bitter critic of General Musharif, Barrister Aitzaz Ahsan was among the first few persons arrested immediately after imposition the state of emergency by Musharif on November 3, 2007.He was released in February and started whirlwind tour of the country successfully leading the movement of lawyers for reinstatement of the deposed judges. The movement also led to the ouster of General Musharif and the restoration of democratic rule. In March 2012 he was again elected to the Senate.By leading the Movement for restoration of Democracy against General Zia(1980-1984) and the Lawyers Movement against General Musharif (2007-2009), barrister Aitzaz Ahsan has become a sign of resistance to anti-democratic moves. His eloquent speeches and his command over Pakistani law make him one of the most recognizable politicians of today. Aitzaz Ahsan is also an active member of Pakistan Peoples Party. [4] Political Career 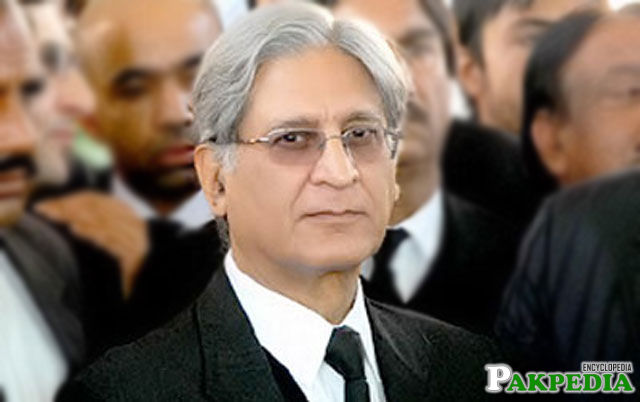 Professionally, Ahsan is a barrister at law and a senior advocate in the Supreme Court of Pakistan. He is senior partner of Aitzaz Ahsan & Associates.He has represented several high-profile Pakistani personalities including three Prime ministers of Pakistan in various cases such as Nawaz Sharif, Benazir Bhutto and Yousaf Raza Gillani and former President of Pakistan Asif Ali Zardari.He had served as President of Supreme Court Bar Association of Pakistan. He is known for representing and leading the lawyers comapign to reinstate former Chief justice of Pakistan Iftikhar Muhammad Chaudhry.In 2008, Ahsan Was awarded the Asian Human Rights Defender Award by the Hong Kong-based Asian Human Rights Commission in reconginition.Ahsan was arrested following Pakistani state of emergency, 2007. He was house arrest in his house in Lahore for four months.He was released in March 2008.Ahsan is also a noted human rights activist in Pakistan[5] Law Career

He is also a human rights activist and Founder and Vice-President of the Human Rights Commission of Pakistan. He has been incarcerated under arbitrary detention laws many times by military and authoritarian regimes. During one such prolonged detention, he wrote The Indus Saga. Aitzaz Ahsan has been selected in the world's top 2008 intellectuals.[6] Human right activist

Aitzaz Ahsan called for a long march to Islamabad on June 14th, 2007. Hundreds of thousands of people gathered in Islamabad for the reinstatement of the Chief Justice of Pakistan, Iftikhar Muhammad Chaudhry. But Aitzaz Ahsan opted against a stage-in. Since then the movement for the restoration of the pre-Nov 3rd, 2007 judiciary has been losing steam. Aitzaz has been compelled to publicly defend his decision, which was widely criticised.[7] Role in Lawyer,s Movement

Ahsan is the author of the book The Indus Saga and the Making of Pakistan and its Urdu translation, Sindh Sagar Aur Qyam-e-Pakistan which presents the cultural history of Pakistan. He has also co-authored the book Divided by Democracy with Lord Meghnad Desai of the London School of Economics.[8] Other work

Nominated for the President

Aitzaz Ahsan who is a member of Pakistan peoples party has been nominated for the president slot by PPP, while on the other hand, Imran Khan has nominated Arif Alvi for this post.Â The Election Commission of Pakistan has announced that the results of Presidential elections will be held on 4th September 2018.

Haider Sultan is the son of late Chaudry Liaqat Al