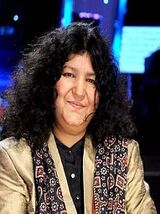 Abida Parveen is a Pakistani musician, composer, entrepreneur, a singer who is considered one of the greatest Sufi singers in the world and is one of the prominent figures in Sufi music. There is no name bigger than Abida in the entire subcontinent for spreading Sufism through singing. The multi-talented singer mainly sings ghazal and possesses the talent to sing in many dialects, including Punjabi, Sindhi, Urdu, and Seraiki. This article has all the information about Parveen, including Abida Parveen Biography and Abida Parveen Songs. This Sufi Queen opened her eyes on 20th February 1954 in Muhalla Goharabad of Larkana.

At the age of three, she expressed her fondness for music and began singing at such an early age. Ustaad Ghulam Haider selected her daughter as his musical successor instead of two sons after realizing her devotion and passion for music. For initial music training, she joined her father’s music school, and Ustaad Salamat Ali of the Sham Chaurasia family tutored her. Besides music education, she also secured a Master’s degree.

Abida belongs to a family that is rich in musical heritage.  Ustaad Ghulam Haider, her father, is a well-known mystic singer who established a music school. Perveen’s father acquainted her with music and Sufism at an early age. When she grew up, she regularly performed with her father at the shrines of Sufi saints. Abida married Radio Pakistan’s senior producer Ghulam Hussain Sheikh in 1975. The couple has three children. Her husband died of a heart attack in the early 2000s.

In 1970 she began to perform on death anniversaries of saints, and in 1973 she joined Hyderabad’s Radio station for singing. Through this platform, her voice was introduced to a vast audience. She sang a Sindhi song ‘Tamhanje Zulfaan Jaay Band Kamaand Wadha,’ which turned out to be her 1st mega-hit song. In 1977 she was recognized as the official vocalist of -Pakistani Radio.

As a ghazal and Sufi music singer, Parveen helped revive the genre and make it popular with audiences beyond Pakistan. Her international prominence grew exponentially during the 1980s. During this time, she started performing at the international level. Her trips to France and the United States turned out to be a great success. After the success of these trips, she toured many states to spread the message of mysticism, harmony, and God via her music.

In 1988 she performed in a live music show in Chicago. Hazrat Ameer Khosrow’s society of Art & Culture recorded this performance. The following year, her show was recorded by the British Broadcasting Corporation at Wembley Conference Hall in London and aired for one hour.

She collaborated with Shehzad Rai on a children’s song, Zindagi, about social issues, and performed in 2008 at the Sufi Festival in New York to further Pakistani heritage and mutual harmony.

In recent years, Perveen has appeared in many shows on television, including ‘Shehr-e-Zaat,’ ‘Jhalak Dakhla Ja,’ ‘Pakistan Idol,’ ‘Samaa E Ishq.’ She was also appointed as a judge in the music competition ‘Sur kshetra’ of Pakistan and India.

She takes a keen interest in arts and has made her gallery with the name Abida Parveen Gallery. This gallery features paintings, music CDs, garments, awards zone, and jewelry. Her daughters run this gallery.