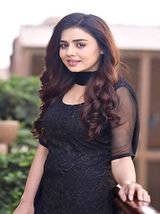 Yasmin Haq is a stunning Pakistani actress and a model who started her career a long way back but she rose to fame in 2018 after playing Sobia in a drama serial ‘Koi Chand Rakh’. She doesn’t belong to an artistic background so whatever she has achieved today is her own diligence and dedication towards her work. She is unmarried and fully focused on her career.

She was born on 12th January 1990 in Lahore where she spent all her life. Currently, she resides in the same city but often visits Karachi for her work.

She holds the degree of Bachelors which she attained from Lahore.

She is a sister of a famous Pakistani Television actress and a Model Kiran Haq who is known for her character in ‘Khali Hath’. Both the sisters are generating their names in the Showbiz Industry with their talent and diligence.

She is in the industry for a long time where she has worked in a few serials including ‘Chunri’, ‘Love Life Aur Lahore’, ‘Shikwa Na Shikayat’ and many more but the serial which made her recognizable is ‘Koi chand rakh’ where she portrayed the role of Sobia opposite Ayeza Khan, Muneeb Butt, Areeba Habib and Imran Abbas. The same year she was incorporated in few other serials including ‘Bohtan’ starring Abid Ali, Arsalan Faisal and Sanam Chaudhry, ‘Bhai Bhai’ opposite Mohsin Ejaz, Ismail Tara and Shabeer Jan.