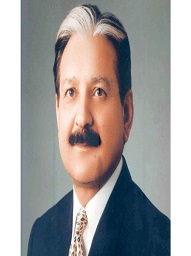 Sardar Muhammad Raza Khan has served as the acting Chief Justice of Pakistan in addition to twice taking up the post of the acting governor of Khyber Pakhtunkhwa. He has also filled the role of interim chief CEC. Khan has been the top judge at the Federal Shariah Court in June 2014, a post he had relinquished with his appointment as the new CEC.
Â Â Â Â 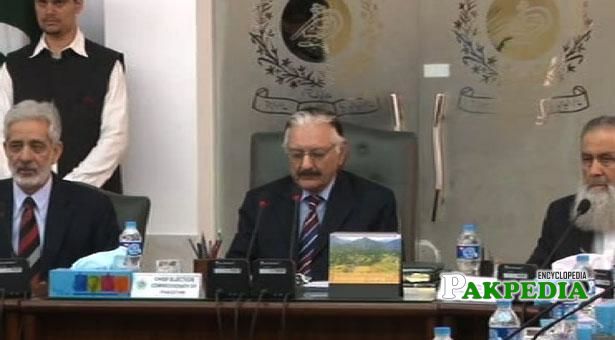 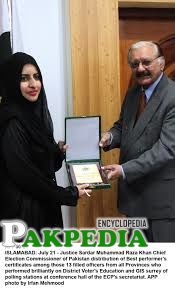 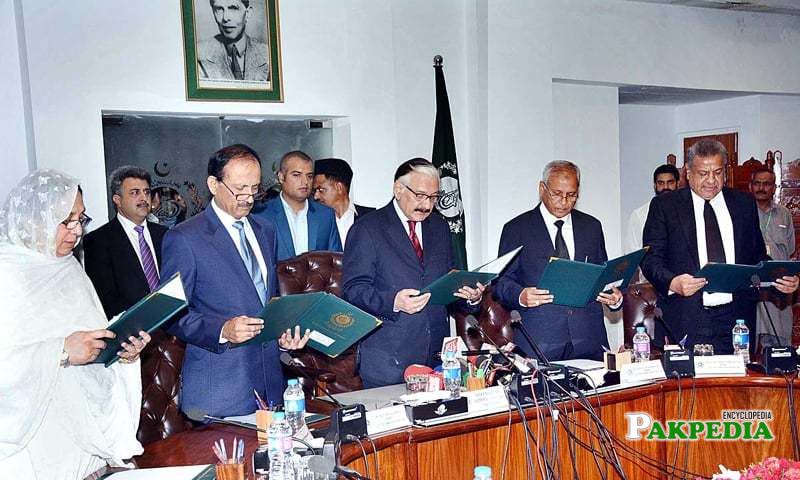 Justice raza taking oath from other members of EC 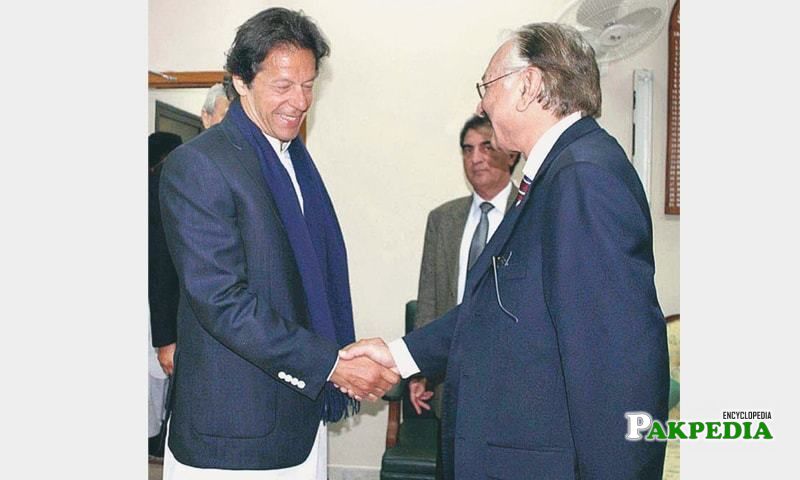 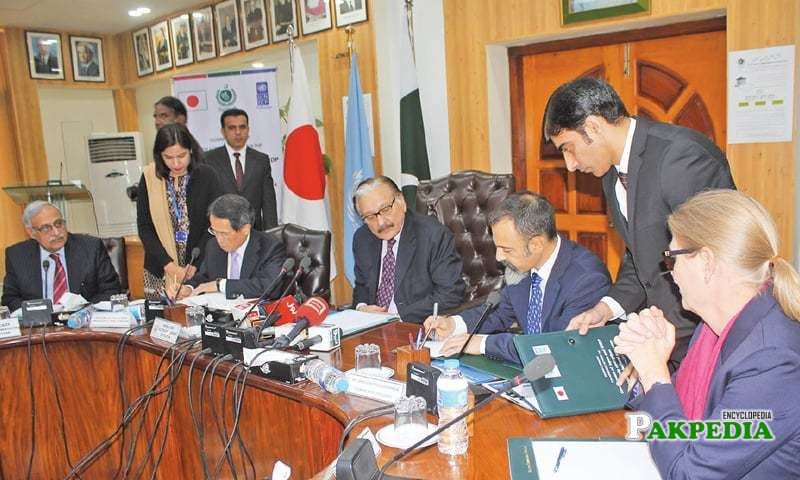 Meetiing with a foreign delegation 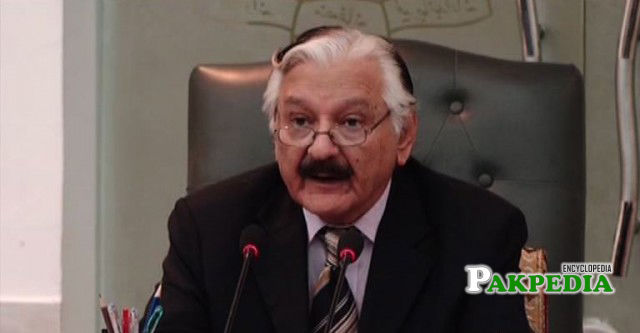 Justice Sardar Muhammad Raza Khan, who was born in Namli Maira District Abbottabad on February 10, 1945, was a justice in the Supreme Court of Pakistan and a former Chief Justice on the Peshawar High Court.Â

Sardar Raza Khan graduated from the Government College of Abbottabad and then studied at Forman Christian College, Lahore and earned his Master (MA) Degree in Economics from the Punjab University. Subsequently, he received his LLB from the same University in 1967. In 1985 he visited the United States to study the American legal system. In 1999 he visited Tokyo, Japan to attend a Three Month Training Course on Corruption among Public Officials. 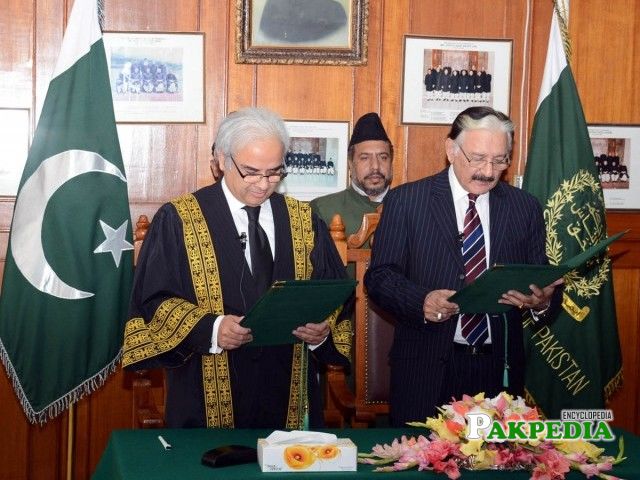 He became a civil judge in 1968 and fast earned the reputation of one unwilling to budge from his principles.Â In 1970, Sardar Muhammad Raza Khan joined Pakistan Customs Service (PCS) Judicial Branch after passing a competitive examination held in 1968-69. He was appointed as Senior Civil Judge in 1973. In 1976 he was appointed as Additional District and Sessions Judge. Justice Sardar was appointed as District and Sessions Judge in 1979. He remained Judicial Commissioner for Northern Areas for more than four years.Justice Raza Khan was appointed Special Judge Customs Taxation and Anti Smuggling in 1992-93Â  before taking permanent office at the Peshawar High Court. He was appointed chief justice of the Peshawar High Court in 2000 by Mohammad Rafiq Tarar and two years later became a judge at the Supreme Court.Â  After refusing to take oath under the Provisional Constitutional Order (PCO) on Nov 3, 2007, he was removed from the Supreme Court after the imposition of emergency by then military ruler Pervez Musharraf. He was reinstated to the court under the democratically-elected government which came to power in 2008. He retired from the Supreme Court of Pakistan in 2010.Â [1] career Â

In June 2004, he visited Ipoh ,Kualalumpur, Malaysia in connection with an International Seminar on Human Rights and Independence on the Judiciary in the Islamic and Non-Islamic Judicial Systems. In 2006, he visited Dhaka, Bangladesh to attend a conference on the criminal judicial system.

Justice Raza was removed and reinstated

Justice Sardar Muhmmad Raza Khan refused to take oath on Provisional Constitutional Order on November 3, 2007. As a result he along with eleven other justices was removed from the Supreme Court Bench. On September 19, 2008, after a democratically elected government came to power, Justice Raza Khan took oath under the Constitution and was reinstated to the Supreme Court with his seniority intact. 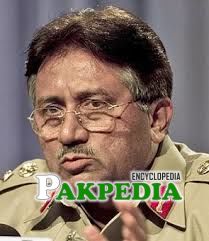 On 28 September 2007, a nine-member Supreme Court of Pakistan bench, in a split 6â€“3 verdict, held that a petition challenging Pervez Musharraf's candidacy for a second term as president was invalid. Khan, head of bench Rana Bhagwandas and Mian Shakirullah Jan dissented with the majority opinion. Declaring the petition invalid were Javed Iqbal, Abdul Hameed Dogar, M. Javed Buttar, Mohammad Nawaz Abbasi, Faqir Muhammad Khokhar and Falak Sher. He singularly dissented in a 13 to 1 verdict of the Supreme Court, holding that judges of the superior judiciary should not be condemned unheard; that they should not be proceeded against for contempt; that such notices issued be withdrawn. In another case, in his separate note, he held that all beneficiaries of NRO be dealt with equality and without discrimination; that the monitoring cell constituted within the supreme court is unprecedented, and the court should take action only when violation of its order is complained by any aggrieved party.Â [2] hearings Â

View on Judiciary of Pakistan 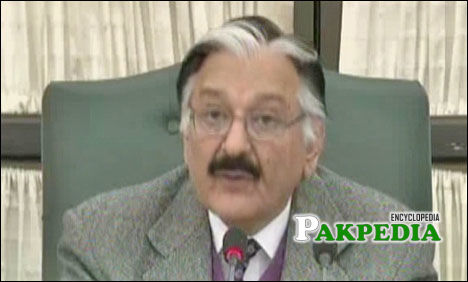 Justicr Raza shared his views on Judiciary of Pakistan

Writing in a column after his retirement, Khan said the judiciary could not be independent if the judges were not free of influence. "Past experience from various countries and even from Pakistan has shown that apart from the government, effective influence can be exercised by politicians and media. To achieve independence, judges have to defend themselves on all fronts which, by now, has become much more difficult," he wrote.Â [3] columnÂ